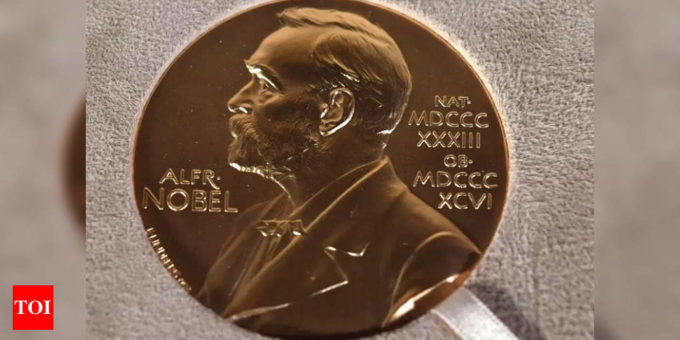 OSLO: In the throes of a cash crunch, the librarians at Oslo’s Nobel Institute for a time donned gloves and tended to the gardens after the landscapers were laid off.
The prestigious institution behind the Nobel Peace Prize has been hard hit by rising costs and funding cuts — made worse by the expense of running its vast and old offices.
With staff reduced from eight to five people since the 1990s, it is now turning to Norway’s parliament for support — raising concerns about the institution’s independence.
“For the past 20 years, our income has been reduced while our costs have continued to rise,” Nobel Institute Director Olav Njolstad told AFP.
“Without additional income, our cash flow will be exhausted in two or three years’ time,” he told AFP from his office, lined with history books on Adolf Hitler and the Cold War.
Now, it is under pressure to sell its historic yellow-tinged building near the city’s lush Royal Palace Park, which has hosted Nelson Mandela and the Dalai Lama.
Given out at gilded ceremonies attended by Norwegian royalty, the Nobel Peace Prize has been won by dozens of people and organisations since 1901, including Barack Obama, Malala Yousafzai and the World Food Programme.
It will be awarded this year on October 8.
The Nobel Institute in Oslo handles the administration to support a five-person committee that selects the peace prize winner — the awards for science and literature are handled by separate committees — and promotes research into peace.
Most of the institution’s funding comes from an annual grant of 5.3 million Swedish crowns (523,000 euros, $605,000) by the Nobel Foundation in Stockholm.
The Swedish chemist and engineer died in 1896, bequeathing money to establish the prize in Norway, along with awards for literature and science in Sweden.
But the funding was cut drastically in 2013 in the wake of the 2007-8 financial crisis, and hasn’t risen since.
What money there is doesn’t stretch as far, due to the impact of inflation and ballooning pension costs.
Njolstad is now appealing to parliament to step in to fill the yawning budget gap, but it has raised serious concerns about the institution’s autonomy.
“It is possible that in some future period there would be some pressure from one political group or another,” said Dan Smith of the Stockholm International Peace Research Institute.
“When money is given then you can expect that there would be a greater voice,” he told AFP.
In line with Alfred Nobel’s will, parliament already appoints the committee’s members.
For decades it has made a modest contribution to the institute’s library, but Njolstad has now asked for a substantially larger annual handout of eight million Norwegian kroner (789,000 euros, $913,000), which will be considered by parliament in the coming months.
He insists the grant would only be used for running costs and would not compromise the committee’s independence.
“Other institutions in society are financed — sometimes up to 100 percent — by the state but nobody questions their independence,” Njolstad said, using the examples of the courts and academic research.
Independence from politics is a cardinal value of the Nobel Committee: ministers have not been allowed to be members since 1936, while sitting MPs were excluded from 1977.
But its choices have sometimes stirred up trouble for the ruling powers in Oslo.
When the committee awarded Chinese dissident Liu Xiaobo the Nobel Peace Prize in 2010, Beijing punished Norway by imposing a six-year freeze on bilateral relations and an effective block on salmon imports.
Observers say that episode may have prompted parliament’s reluctance to fund the Nobel Institute.
“The issue raises several fundamental and practical questions, and deserves an open political debate,” Tone Wilhelmsen Troen, the head of Norway’s parliament, told AFP.
Back at the Nobel Institute’s premises in Oslo, the librarians no longer tend to the grounds after a generous neighbour eventually stepped in to cover the gardening costs.
For some, selling the building offers a viable solution to the institute’s money troubles.
Maintaining such a costly property “is not a satisfactory way to manage” the money left by Alfred Nobel, said Vidar Helgesen, the director of the Nobel Foundation, the institute’s main backer.
But for Njolstad, selling the institute’s home would be “a terribly bad idea”.
He doesn’t think it will reduce costs and besides, they’ve been there since 1905.
“All our history is connected to this building,” he added.

Rahul Gandhi Gets Support From Sister Priyanka In Move To Quit: Sources
2019-05-25