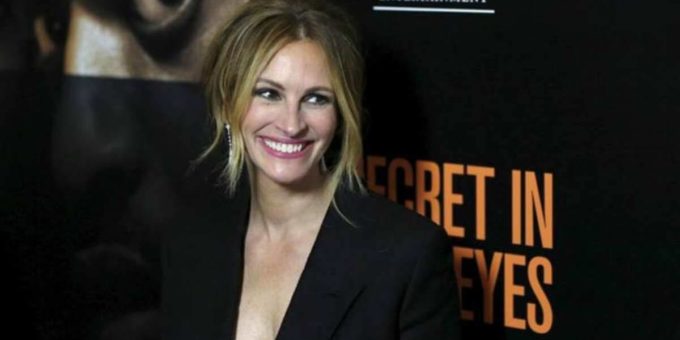 The ongoing Cannes Film Festival has had many fashion highlights. And the latest is the red carpet debut of Hazel Moder, the 16-year-old daughter of actor Julia Roberts.

Spotted alongside her father Danny Moder, Hazel was seen in a light yellow shirt dress which featured pretty floral embroidery.

Prior to this, Sharon Stone made heads turn as she made a comeback to the red carpet event in a blue tulle gown. The off-shoulder Dolce & Gabbana Autumn/Winter 2020 Couture gown compelled everyone to approve of the look.

Interestingly, she too was spotted with her god-daughter Helana. Sharing the photo, the Basic Instinct actor wrote, “Loved being on the carpet w/my God daughter Helana”

Tilda Swinton too made quite an appearance as she exhibited her patent androgynous style on the red carpet. She was spotted in Haider Ackermann ensembles on two occasions.

Tilda Swinton poses at the photocall for the film The French Dispatch at Cannes. (AP Photo/Brynn Anderson)

Tilda Swinton at the screening of the film The French Dispatch at Cannes. (REUTERS/Sarah Meyssonnier)

What do you think of her look?

JWoww to Angelina Pivarnick: You Forced Snooki to Quit Jersey Shore By Being a Whiny B–ch!
2020-11-30