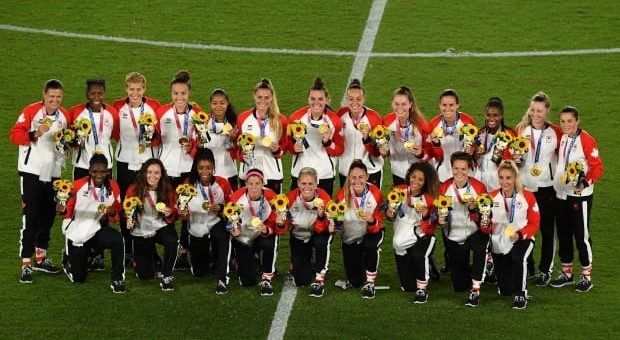 Nine years ago Canada’s national women’s team earned bronze at the London Olympics after a controversial semifinal loss to the United States.

Canada’s women were named the team of the year by The Canadian Press at the end of 2012, but the national side wanted more. They wanted Olympic gold.

Julia Grosso’s goal in penalty kicks lifted Canada to a 1-1 shootout victory over Sweden in the Tokyo Games final this past summer, realizing that nearly decade-old dream. That championship victory was the highlight of a 12-match unbeaten streak that once again earned Canada’s women team of the year honours from The Canadian Press on Thursday.

Manager Bev Priestman said that placing third in London and then again at the 2016 Rio Olympics fuelled her squad to push harder for gold.

“I think that moment [in London] created a lot of the momentum and the belief and the passion for the younger players over the last eight years,” said Priestman who added that Grosso had specifically referenced coming up short in London as motivation.

“You’d like to think that this gold medal now is going to have the same impact on any young player in Canada, because they got to see such a moment that will hopefully inspire them to go and represent Canada in the future.”

Canada’s women’s side finished 2021 with nine wins, six draws, and three losses. The 12-match unbeaten streak in the middle of the year carried the Canadians through the Tokyo Olympic tournament and included two wins against New Zealand in a Celebration Tour to commemorate the gold-medal win.

Priestman said that her team’s success in 2021 was thanks to the right mix of young and old players, all united in their passion to reach the next level and inspire a new generation of players.

“We’ve got a great blend of veteran players with many, many Olympics and World Cups in their experiences and a young group who actually have Olympic Games under their belt,” said Priestman. “And then it’s ready to go take a whole new group of faces on that journey now to help us sustain success in the future.”

Sports editors, writers and broadcasters from across Canada vote on the award. The women’s soccer team won this year’s award in a landslide, taking 38 of 44 possible votes.

Canada’s Olympic women’s swim team was second with three votes, followed by the women’s national hockey team, the men’s national soccer team, and the Montreal Canadiens who had one vote each.

“Team Canada must be a lock in what has to be one of the most competitive fields in decades to win this award,” said David Trifunov, managing editor of the Kelowna Daily News. “Finally reaching the summit of women’s soccer after years of crowding the podium was inspirational to the tens of thousands of children first lacing up their cleats across the nation.”

Moments from Alphonso Davies, Steph Labbé, Julia Grosso, Sam Adekugbe and Jessie Fleming all made the list in a blockbuster year for the Canadian national soccer teams. Relive the best moments from 2021 with CBC’s Signa Butler and Between the Sticks’ Alexandre Gangué-Ruzic. 6:38

Priestman and her team are not resting on their laurels, with a World Cup title Canada’s next target.

“We’ve done fantastic with back-to-back-to-back podiums at Olympics. Now it’s about us trying to get on the podium for the World Cup, which we’ve yet to do,” said Priestman.

The Women’s World Cup will be hosted by Australia and New Zealand in 2023. Canada will have to qualify through a regional tournament this coming July.

The Canadian men’s junior hockey team won the award in 2020.