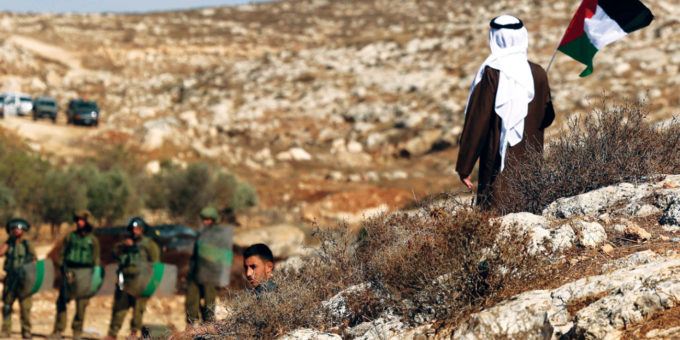 JERUSALEM: Israel is facing growing calls to release five Palestinians who have been on hunger strike for weeks to protest a controversial policy of holding them indefinitely without charge, including one who has been fasting for 120 days and is in severe condition.

Israel says the policy, known as “administrative detention,” is needed to detain suspects without disclosing sensitive intelligence, while the Palestinians and human rights groups say it denies them due process. Suspects can be held for months or years without seeing the evidence against them.

Palestinians have been holding rallies across the Israeli-occupied West Bank and Gaza in solidarity with the hunger strike and to protest against administrative detention. Prisoners have held a number of hunger strikes in recent years to protest the policy and to campaign for better prison conditions, but the latest appears to be among the most serious.

The Israeli military did not respond to a request for comment.

The five Palestinians, ranging in age from 28 to 45, have been on hunger strike for at least 32 days. A sixth prisoner ended his 113-day hunger strike on Thursday after being told he will be released in three months, his lawyer said.

Kayed Fasfous, 32, has been on hunger strike for at least 120 days and is hospitalized in Israel. His weight has dropped from 95 to 45 kilograms, according to a recent evaluation by Dr. Amit Tirosh, an Israeli physician, on behalf of Physicians for Human Rights-Israel.

He drinks around 1.5 liters of water a day and takes a few grains of sugar at a time, but stopped consuming salt because it upset his stomach and is refusing infusions. He has difficulty speaking, suffers short-term memory loss, hearing difficulty and a permanent headache, raising concerns of cognitive damage, the report said. Tirosh said his condition is “life-threatening” and that even if he stops the hunger strike, he will still need to spend several weeks in the hospital.

Tirosh said that a hunger strikes can cause “severe, prolonged and irreparable” brain and cognitive damage.

Fasfous’ detention has been suspended on health grounds, but Israel has refused his request to be transferred to a hospital in the occupied West Bank, where he says he would halt his hunger strike.

“The hospital becomes kind of a prison,” said Ran Goldstein, the executive director of Physicians for Human Rights-Israel. “He is not arrested anymore, however, he cannot leave Israel.”

Fasfous would also be subject to arrest again once he recovers. Israel regularly detains Palestinian suspects from across the occupied West Bank, including in areas governed by the internationally recognized Palestinian Authority.

Hundreds of Palestinians, including Fasfous’ brother, took part in a demonstration in the West Bank town of Dhahiriya on Thursday in solidarity with the hunger strikers.

An Israeli prison service official said three of the hunger strikers are in stable condition under 24-hour medical supervision in a prison medical facility, while another, who has been fasting for 30 days, does not require that degree of care.

Miqdad Qawasmeh, 24, who had been on hunger strike for 113 days, ended his strike early Thursday after being told he will be released in February, said his lawyer, Jawad Boulos.

Israel’s prison service said it is holding at least 488 people in administrative detention.

Roy Yellin, of the Israeli human rights group B’Tselem, said administrative detainees are held in “a Kafkaesque legal reality that Israel has created specifically for Palestinians under which they are detained for an indefinite period of time without real legal recourse to prove their innocence.”

He said administrative detainees are often held on suspicion that they might carry out an attack, with military judges granting “rubber-stamp” approval.

“Administrative detention is a measure that Israel used almost exclusively for Palestinians and almost never for Jews,” he said, calling it part of the “apartheid reality” of Israeli rule.

Special Ops 1.5, Red Notice, Kurup: 9 titles that are our top picks this weekend

No Establishment, When Criticised, Feels Happy About It, Says Javed Akhtar
2019-10-12