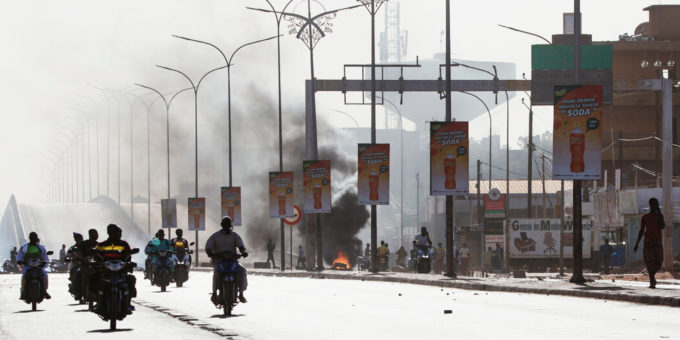 OUAGADOUGOU, Burkina Faso — The military announced Monday that it had seized power in Burkina Faso, suspending the Constitution and ousting the country’s democratically elected president hours after mutinous soldiers surrounded his home.

President Roch Marc Christian Kaboré, 64, had been leading Burkina Faso, a poor, landlocked country in Western Africa, since 2015. But he faced growing criticism from civilians and the military alike over his government’s inability to beat back the Islamist insurgents creating havoc in this nation of 21 million people.

Burkina Faso had remained largely peaceful until 2015. But that year, militant groups launched a violent campaign as part of a broader upheaval in the Sahel, the vast stretch of land just south of the Sahara.

The violence has destabilized large swathes of Burkina Faso, displacing 1.4 million people and causing 2,000 deaths just last year alone. And it led to mounting public frustration with Mr. Kaboré, who, younger people, especially, faulted for the government’s failure to stem the tide of violence.

In the past year, there has been a flurry of coups in Africa, the greatest concentration in years, with takeovers in Guinea, Sudan, Chad and Mali.

The coup in Burkina Faso was announced on state television late Monday afternoon by a junior army officer who said the army had seized power in response to the “exasperation of the people.” Beside him sat Lt. Col. Paul-Henri Damiba, a senior military officer who was introduced to the people of Burkina Faso as their new head of state.

The military said the nation’s land and air borders would be closed, and a nightly curfew imposed until further notice.

There was no mention of Mr. Kaboré’s whereabouts and no indication that he had agreed to step down. “The authorities have been captured without bloodshed and are being kept in a secure place,” the soldier said.

The military’s announcement came after a turbulent day in Burkina Faso.

On Sunday, soldiers seized several military bases and the riot police clashed with civilian protesters. In the evening, shots were heard near the president’s home, lasting into the early hours of Monday, setting off hours of uncertainty amid reports that the military was pressuring the president to resign.

In the afternoon, a tweet had appeared on President Kaboré’s account that asked people to stand fast behind their tottering democracy. “Our country is going through a difficult time,” he wrote, urging mutinying soldiers to lay down their arms.

Public support for the mutiny was driven by a perception that Mr. Kaboré was incapable of beating back the Islamist groups that have been spreading mayhem for so long, said Rinaldo Depagne, an expert on Burkina Faso at the International Crisis Group.

“He’s not absolutely awful and corrupt,” Mr. Depagne said of the deposed leader. “But it’s obvious that people think, rightly or wrongly, that a man in uniform with a big gun is better able to protect them than a democratically elected president.”

Hours before the coup was formally announced, some residents of the capital welcomed it as a foregone conclusion.

Soldiers stood guard outside the state-owned broadcaster from early morning as young men on motorbikes streamed past, honking their horns and cheering. At a nearby cellphone market, Kudougou Damiba threw himself to his knees.

“We are saved!” declared the cellphone dealer. “Roch is gone.”

Mr. Damiba blamed the president for his own downfall, saying he failed to unite people against the rising tide of Islamist violence.

“The country has been fractured,” he said. “Instead of uniting people, Roch divided them, which allowed the jihadists to attack us. It’s his fault.”

Blame has also fallen squarely on the former colonial power, France, which has deployed troops to the Sahel region, including Burkina Faso, in an effort to counter Islamist attacks, although the situation continues to deteriorate.

Not everyone welcomed the military takeover. Among the customers at the cellphone market was Anatole Compaoré, an unemployed 31-year-old.

Mr. Compaoré took part in a wave of recent street protests against Mr. Kaboré’s rule, but even so he was skeptical that a new bout of military rule would solve his country’s problems.

When Blaise Compaoré, Burkina Faso’s leader of 27 years, was overthrown in 2014, “they said everything would change,” he said. “But nothing changed. And I’m not sure it will be any different this time.”