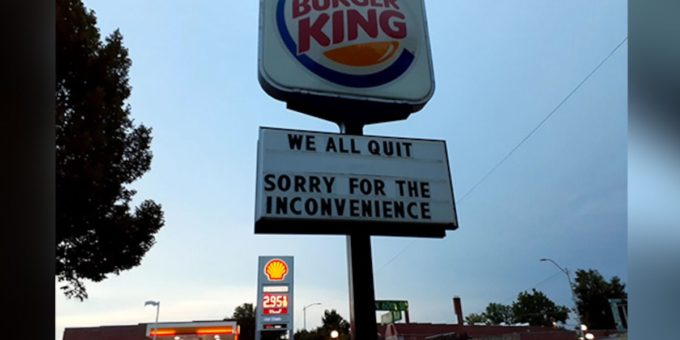 Burger King is known for its quirky advertisements and interesting marketing initiatives, apart from its delicious burgers. However, the global burger chain has found itself in the midst of a controversy recently. According to a photograph on social media, the entire staff at a Burger King outlet in Nebraska, USA decided to quit their jobs together. They also left a message for the upper management on the Burger King signboard outside the restaurant. The photograph of the sign has now gone viral. Take a look at the original image here:

The image was originally shared on Facebook by one of the former Burger King employees, Rachel Flores. “One of the original photos. We quit cause upper management was a joke and had no care for me or my employees. I put in my 2 weeks and so did MANY other people,” she wrote. Since then, it has been widely circulated across social media and several media houses as well. In the picture, we see the Burger King logo on the sign. Instead of the usual ‘open now’ or ‘drive through’ in the text section, the employees have written, “We all quit. Sorry for the inconvenience.”

According to reports, the reason behind this mass resignation was the high-pressure work environment and the upper management’s disinterest in the employees’ issues. Rachel Flores told TODAY Food that air conditioning wasn’t working in peak summers, leading to health issues with many employees. She further said that senior Burger King executives had simply shrugged off their responsibility for the same.

Twitter users too shared their reactions to the viral sign. Take a look at what they wrote:

At a Burger King in Lincoln, Nebraska, the employees post, “We All Quit”

Flores said the Burger King had employees working in the kitchen w/ no air conditioning for weeks. The kitchen reached over 90 degrees—Flores ended up in the hospital for dehydrationhttps://t.co/wpcRxWuXQLpic.twitter.com/7yLesvVBiP— Steven Greenhouse (@greenhousenyt) July 12, 2021

The Burger King staff resignation is not the first instance of its kind. There has been an increasingly alarming trend of employees at fast food restaurants quitting their jobs en masse. Recently, a mysterious video had surfaced online showing that all the employees at a McDonald’s outlet had quit. “Everyone quit. We are closed,” read the handwritten note. Read more about it here.

What did you think of the Burger King employees’ story? Tell us in the comments below.

Top self-defence techniques you need to teach your child