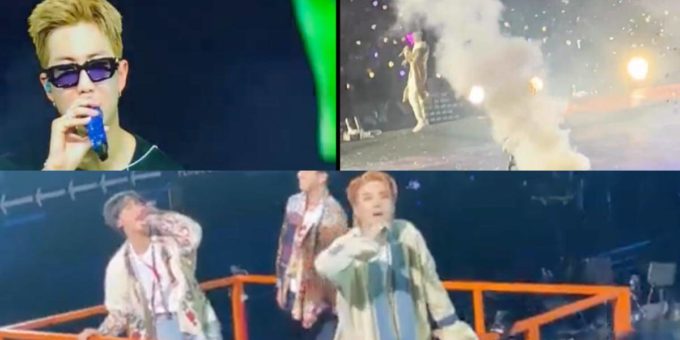 BTS promised to take Los Angeles by storm, and they did. Finally performing in front of their fans after over two years, the septet comprising RM, Jin, Suga, Jungkook, J-Hope, Jimin and V left the ARMY wanting more. RM and Jungkook became the subject of much discussion on social media, and their names trended on Twitter. There were several other grand moments from the Permission To Dance concert, including Jin getting excited by a smoke machine, and Suga throwing a water bottle at screaming ARMY members. A fan wrote, “Our man is wilding with the smoke machine!”

no because this man was wildin with the smoke machine today #PTD_ON_STAGE_LA #bts pic.twitter.com/JlsSx7FRCp

There was another video of V taking a swipe at fire as well.

RM gave an emotional speech about how his sadness evaporated after seeing ARMY members in person. “Thank you for this historical night. I really thought that I am going to miss this moment in my forties, sixties. You guys are the proof of our existence, our leave. You guys are our proof! We are now truly bulletproof.”

🐨: you guys are proof of our existence of our value our love, our peace you guys are our goddamn truth WE WERE THE BULLET YOU GUYS WERE OUR PROOF WE’RE NOW TRULY BULLETPROOF 💜#PTD_ON_STAGE_LA #BTS pic.twitter.com/15vGjmKYPc

Of course, J-Hope’s moves had fans screaming, too. In one video, Suga took out a bottle of water, and then sprayed it at fans while performing, making them shriek.

I didn’t make it out of alive. Jung Hoseok took me out. 🥵 #PermissionToDanceOnStage_LA #bts #sofistadium pic.twitter.com/DWR2ie13KE

It has been a thrilling year for BTS, as they achieved new milestones, breaking records with Butter, Permission To Dance and My Universe, which was also a collaboration with Coldplay. They even scored a nomination at the Grammys.