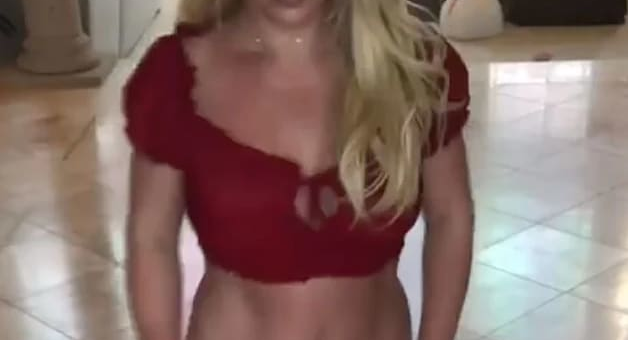 Britney Spears has bared most of her soul over the past few months.


She’s cried in court. She’s poured her feelings out on social media. She’s made it clear to anyone who will listen that she’s been borderline depressed due to the way her dad has behaved as her conservator.


Now, however, Jamie Spears is no longer in this controlling role.


And, in response, Britney is baring far more than just her soul.


On Thursday, the singer posted yet another revealing photo.


As you can see above, she’s wearing a low-cut red top and white shorts in the snapshot, the latter of which is pulled down very far.


No, Britney is not trying to tease and titillate by nearly showing off her most private of parts.


Instead, the artist is flaunting her appaent weight loss.


“Well … for the love of God I finally see some definition in my abs !!!!,” the 38-year old wrote alongside a video of her dancing to Bush’s “Glycerine” track.


Britney does, indeed, look great in this photo.


But it’s sort of upsetting that she ever thought she needed to lose weight, you know? Spears has always been in outstanding shape.


Elsewhere in her caption, Britney shared a memory.


“Glycerine was my favorite song in high school … sounds like gasoline but you know “Glycerine” !!!!” she wrote, adding:


“literally the coolest moment of my life!!!!”


The performer has previously opened up about her figure.


“It’s really weird whenever I try to slim down it usually starts with my legs first … then my stomach … then my face … and that’s when I know I’ve actually lost weight !!!!” she wrote via Instagram in August.


“When you swipe to the second pic you can actually really see how slim my face is but I’m not so sure I like it.”


Britney has also taken to uploading many pictures of her rear end — because she wants her family to kiss it.


To her credit, Spears at least recognizes that all this talk about her weight can be a turn off.


“In the old days when women were heavier they were considered more attractive to men because it was a sign of wealth !!!!” she added in August.


“I have a couple of throwback dances from this summer where I looked heavier but it’s weird cause I think I was happier !!!! Oh well … sorry for my shallow talk of weight … but it is what it is you know!!!!


Last month, in news that truly impacts Britney’s life, a judge approved her petition to remove her father from his 13-year position as the conservator of her estate.


“Mr. Spears loves his daughter Britney unconditionally. For thirteen years, he has tried to do what is in her best interests, whether as a conservator or her father.


“This started with agreeing to serve as her conservator when she voluntarily entered into the conservatorship,” the 69-year-old’s lawyer said in a statement at the time.


“This included helping her revive her career and re-establish a relationship with her children.


“For anyone who has tried to help a family member dealing with mental health issues, they can appreciate the tremendous amount of daily worry and work this required.”

T20 World Cup 2021, India vs Pakistan: When And Where To Watch, Live Telecast, Live Streaming