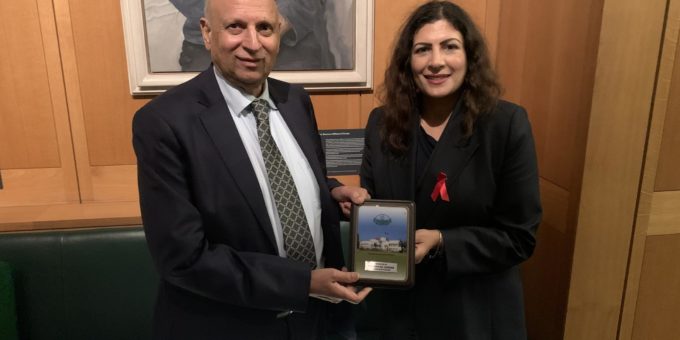 The All-Party Parliamentary Groups (APPGs) on British Sikhs hosted a meeting with the Governor of Punjab, Pakistan Chaudhry Mohammad Sarwar.

Preet Kaur Gill, Chair of the All Party Parliamentary Group (APPG) on British Sikhs hosted a cross-party meeting in the Houses of Parliament with the Governor of Punjab, Pakistan — Chaudhry Mohammad Sarwar — on projects to support the Sikh community in Pakistan, including the reopening of the Kartarpur Corridor.

The conversation covered the protection of religious sites and freedoms in Pakistan, relations with India, and efforts to protect and promote Punjabi culture and heritage, including with the construction of the Baba Guru Nanak international university.

The Kartarpur Corridor allows Sikh pilgrims to travel without visas across to Pakistan to pay respects at Kartarpur Sahib Gurdwara, a sacred holy site and the final resting place of Guru Nanak Dev Ji, the founder of Sikhism.

India and Pakistan signed the longstanding Kartarpur corridor agreement in October 2019, but has been closed since March 2020, when the corridor was shut in light of the Covid-19 pandemic.

Last month, a spokesperson for the Pakistan Ministry of External Affairs announced that a jatha of around 1,500 pilgrims would be allowed to make the journey in recognition of the importance of Gurpurab.

Preet Kaur Gill MP  said: “I welcome Pakistan’s offer to reopen the Kartarpur Corridor in recognition of its importance to the Sikh community. Gurdwara Darbar Sahib Kartarpur is a beacon of hope and peace. I am delighted that pilgrims will once again be able to make this hallowed journey.

“It has been my honour to host Mohammad Sarwar in the UK Parliament, and I thank him for the hand of friendship he has extended to Sikhs across the globe.

“The reopening of the corridor is a hugely positive step, which I hope can act as a catalyst to improve ties between India and Pakistan.”

Zac Efron on playing Chickie Donohue, the man who delivered beer in a warzone
2022-09-27