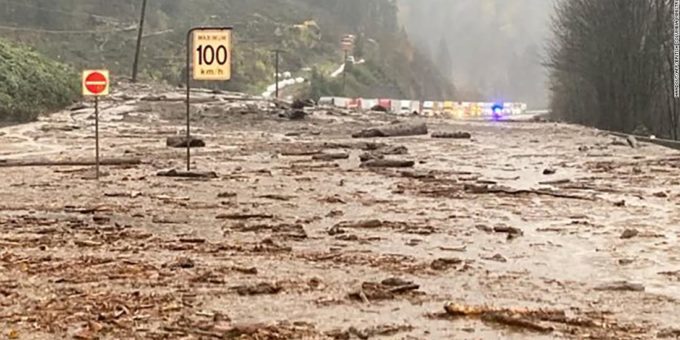 Up to 50 of those trapped on Highway 7 east of Vancouver are children, officials said.

David Boone, the director of Vancouver’s Heavy Urban Search and Rescue, told CBC News on Monday that fire crews had already rescued at least 14 people trapped in vehicles after the rainy weather.

“What complicates this situation is we have two slides on Highway 7 and we have people that were trapped in the debris … and some have been rescued,” Boone told CBC News.

Officials aren’t yet sure whether they know the full scope of how many vehicles and people are missing, Boone said.

At least nine people were taken to a hospital with minor injuries after a landslide near Agassiz, British Columbia, according to a tweet from the British Columbia Emergency Health Services.

According to the agency, ambulances are staged in Chilliwack in case patients require care from flooding or landslides.

Rain and wind have prompted evacuation orders in British Columbia and flood warnings in Washington state.

Officials ordered all 7,000 residents of the city of Merritt, British Columbia, to evacuate.

Canadian Prime Minister Justin Trudeau said the government is ready to give the town whatever assistance it needs.

Elsewhere in the province, several homes in Abbotsford were ordered evacuated after a local emergency was declared.

“The City of Abbotsford is currently experiencing heavy rainfall that has resulted in several localized emergencies within the City. Various small mud slides and localized flooding have occurred in many areas within the City,” the city said in a news release.

There are numerous closures and delays on highways. Transportation BC tweeted images of mudslides covering roadways.

Police in the US border town of Sumas, Washington, tweeted videos of flooding.

One video shared by Sumas Police shows a road inundated with water. Police told residents in a tweet Monday that the road to the Canadian border has been closed.

Another video shared by Bellingham resident Christine Smith shows a substantial amount of water from Squalicum Creek spilling over and rushing onto the street.

At least 160,000 residents in northwestern Washington were experiencing power outages as of 3:30 p.m. PT, according to poweroutage.us.

Dozens of roads were closed Monday after heavy rains battered the area for three days.

High winds were so strong in the area that the National Weather Service reported a 99 mph gust at the 6,680 foot elevation on Mount Rainier.

“Winds with the surge through the Strait of Juan de Fuca, across Whidbey Island, into the shores of Skagit and Snohomish Counties have been gusting between 45-60 MPH. The winds should weaken as it makes it way further inland. The wind change will be sudden and strong #wawx”, the National Weather Service’s office in Seattle tweeted.

Several rivers in Washington are under flood warnings and roads in the Olympic National Park was reported several road closures due to flooding and mudslides.

The US Coast Guard tweeted that it was helping local authorities evacuating residences west of the town of Forks.

“Report of 10 people in danger of rising flood waters in the area. No reported injuries,” the tweet said.

Skagit County officials announced that Covid-19 testing and vaccine sites would be closed Monday and Tuesday because of flooding and high winds.