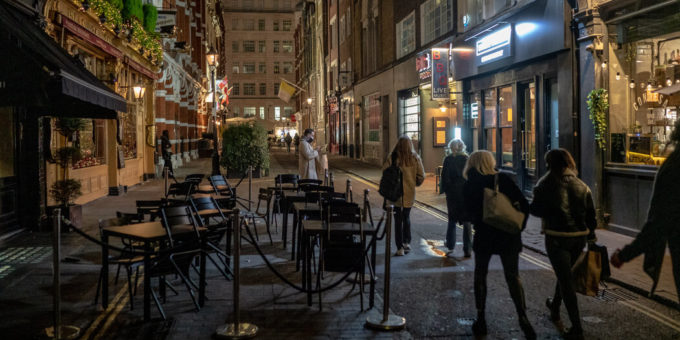 The government hasn’t required hospitality businesses to shut, but new measures in England, such as asking people to work from home and requiring Covid passes for large events, were announced nearly two weeks ago and have led to Christmas party cancellations and fewer people socializing outside their homes. Last week, England’s chief medical officer encouraged people to go only to events that “really matter” to them.

The announcement of the grants came “fairly late,” said Darrin Jacobs, the owner of Luc’s Brasserie, a French restaurant in London’s financial district. The Covid measures, known as Plan B, were introduced “and then you have a week’s anxiety where you don’t know what’s happening,” he said.

Eleven days ago, the Christmas party cancellations began at Luc’s and at the time Mr. Jacobs was optimistic because many of them had been postponed until January. Though he remains hopeful those bookings go ahead next year, the past week has been difficult. About 60 percent of his staff are off work with Covid and the restaurant has been getting quieter and quieter. On Wednesday, it will close for lunch and only open in the evening for the parties still booked.

“The £6,000 grant, obviously it helps,” Mr. Jacos said. “But it doesn’t really make up for the loss we’ve had for the entire month of December.” The month normally helps restaurants get them through the quieter first quarter.

Still, the grants have been broadly welcomed by the hospitality industry. Kate Nicholls, chief executive of UKHospitality, a trade group, said it was a “generous package.” It provides “an immediate emergency cash injection for those businesses who, through no fault of their own, have seen their most valuable trading period annihilated,” she added in a statement.

But with government ministers in tense talks about whether more restrictions will be needed after Christmas, there are already concerns that the grants might not be enough.

“Whilst these measures are a positive starting point, if restrictions persist or are tightened further, then we would need to see a wider support package,” Shevaun Haviland, the director general of the British Chambers of Commerce, said in a statement.