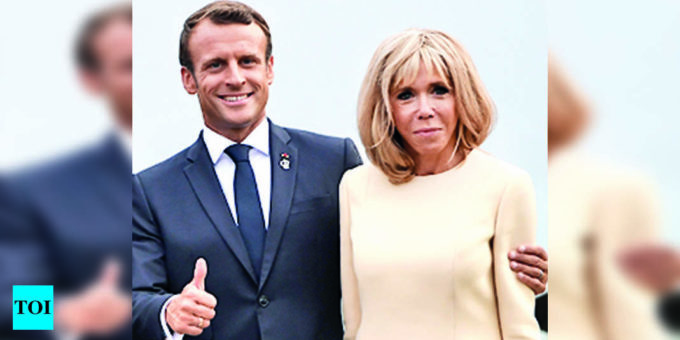 PARIS: A disinformation campaign has in the last days targeted the wife of French President Emmanuel Macron falsely claiming she was a born a man, adding to fears over internet fake news less than four months ahead of presidential elections.
Brigitte Macron, 68, intends to file a legal complaint to sue over the disinformation. “She has decided to start procedures, it’s in process,” her lawyer Jean Ennochi said, without giving more details. The false claim had grown in momentum on social media over the last days, mixing strong opposition to the centrist Macron with extreme right ideology and transphobia.
Fake news of transphobic nature targeting prominent political figures has been very rare in France until now, but is not a new phenomenon globally. Women targeted in the past have included former US first lady Michelle Obama, US vice-president Kamala Harris and New Zealand PM Jacinda Ardern.
But the eruption of attacks against Brigitte, come as her husband prepares to fight what is expected to be a tense battle to seek re-election in April. Macron’s relationship with his wife 24 years his senior as always attracted fierce media interest in France and outside. This is not the first time that the Macron couple have been targeted by rumours targeting gender or sexual orientation. During the 2017 campaign when he won office, Macron had to deny claims about his alleged homosexuality.
For several months, messages have multiplied on social networks claiming that Brigitte Macron, born as Brigitte Trogneux, is a transgender woman whose first name at birth was Jean-Michel. The false claims allege that a vast plot has been engineered to hide this change in civil status. The first such claim appears to have been made on Facebook in March by a user calling themselves “Natacha Rey”. The page of this “journalist” is swarming with conspiratorial theories.
The spreading of the claims began in mid-October with the publication of an article on the supposed “mystery of Brigitte Macron” in “Facts and Documents”, a review founded in 1996 by a shadowy ultra-right writer. Almost two weeks after its publication, the hashtag #JeanMichelTrogneux appeared for the first time on Twitter on November 1. The hashtag has so far generated 68,300 retweets and over 174,000 likes.