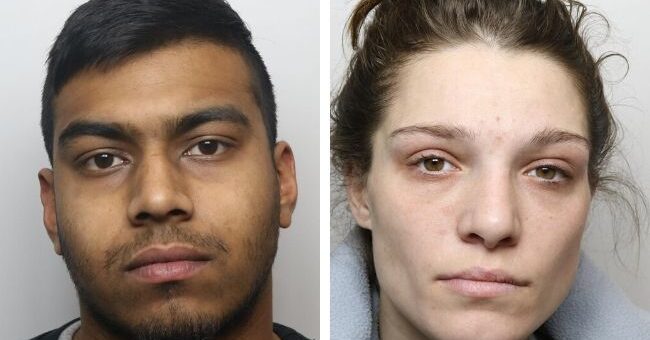 A man and woman have been jailed for a total of 25 years for a violent rape in which their terrified victim was threatened with a large kitchen knife and her head was banged on a wall.

Yazmin Ali, 31, of Lily Street, Manningham, Bradford, who held the weapon to the victim’s throat when she refused to have sex with them, was imprisoned for 13 years.

Mohammed Hussain, 22, of Main Street, Bingley, who ripped her top and bra off and pushed her face down on the bed to rape her, was locked up for 12 years.

Both were sentenced at Bradford Crown Court this week after they were convicted of rape in January.

Ali and Hussain lured their victim to a flat in Bradford in July, 2017, with the promise of vodka and cocaine.

Ali was also found guilty of assault occasioning actual bodily harm by biting the woman on the arm. She pleaded guilty to racially aggravated harassment of a police officer arresting her for the offences.

Recorder Simon Jackson QC said there was “a dramatic and dangerous escalation of events” when the woman refused to have sex with the defendants.

Ali held the knife towards her throat to make her submit and Hussain banged her head on the bedroom wall.

Hussain had a previous conviction for kidnap and was on licence at the time.

Their victim was walking along a street in Bradford city centre when she was beckoned into a pub by the defendants.

Later that night, she was lured to Ali’s flat with the promise of more vodka and cocaine.

Mr Howard said the defendants had sex in front of her before Ali held a kitchen knife to her throat and Hussain ripped off her top and bra.

Hussain then raped her on the bed before the women got into a struggle and Ali bit her arm.

The woman grabbed her clothes and one of her shoes and fled. She was distressed and partially clothed and a cleaning supervisor who came across her called the police.

When officers went to Ali’s flat, she was abusive and obstructive. She threatened them and was racially abusive.

In her victim personal statement, the woman said she was now “a bag of nerves” and afraid to go out.

Nick Worsley, Hussain’s barrister, said he was normally a pleasant, hardworking young man and the offence was out of character. It was almost three years ago and he had kept out of trouble since.

Hussain had been drinking and had smoked cannabis that night. He was intoxicated when he took part in the unplanned offence.

He was educating himself while in prison and had matured and changed a great deal.

Gillian Batts, for Ali, said she had a “difficult and turbulent” start in life.

Her coping mechanism at the time of the offences was to drink heavily and take drugs.

She had been very ill in the past few months, needing three blood transfusions.

Both Ali and Hussain must sign on the sex offender register for life.

Anurag Kashyap’s daughter Aaliyah Kashyap recalls having just Rs 1500 in her bank account, not being able to afford groceries
2022-07-07