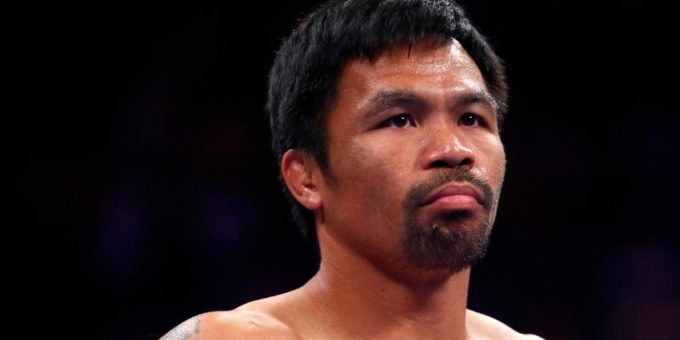 Filipino boxing champion Manny Pacquiao on Sunday announced that he is running to be the next president of the Philippines.

Pacquiao was nominated by a faction of the ruling PDP-Laban party, which is also the party of the incumbent president, Rodrigo Duterte, Reuters reported.

“I am a fighter, and I will always be a fighter inside and outside the ring,” said Pacquiao, who currently serves as a Philippines senator. “I am accepting your nomination as candidate for president of the Republic of the Philippines.”

The same faction nominated Duterte as vice president, which critics lambasted as a thinly veiled attempt for him to hold on to power and possibly avoid prosecution for his bloody war on drugs. Under the country’s constitution, Duterte can no longer run for president but can run as vice president, as the positions are elected separately. Go ultimately declined the nomination.

Pacquiao, 42, has previously hinted that he would run for the presidency, though when he first entered politics, he was too young to be eligible. In the Philippines, presidential candidates must be at least 40 years old.

Reuters noted that Pacquiao, who served as president of the PDP-Laban party until July of this year, trails more promising front-runners in recent polling despite his popularity in the Philippines.

Pacquiao was once close allies with Duterte but has since become one of his most vocal adversaries, attacking him for his close relationship with China and accusing him of being soft on corruption.

Back in June, Duterte took shots at Pacquiao for this apparent about-face.

“You didn’t tell me anything all these years, you’re all praises and praises for me and now you’ll say corrupt,” Duterte said of Pacquiao’s criticisms. “I will hound you every day. I will expose you as a liar.”