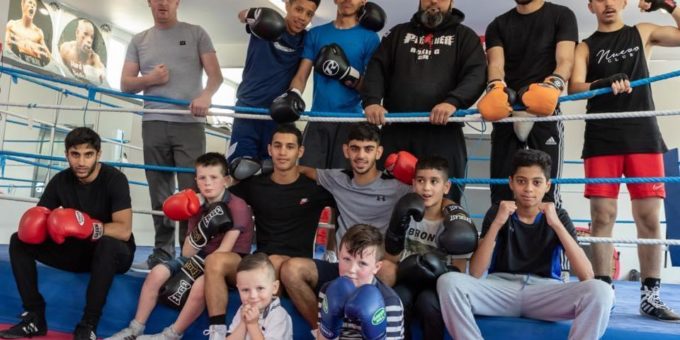 A BOXER wants to raise money for a new ring at the gym he trains at to help keep young people off the streets.

Samir Aftab is unable to use the ring at Premier Boxing, in The Haulgh, due to it being broken in the middle, making it unsafe for sparring.

The regional champ, 20, not only trains there but coaches youngsters. To buy a new ring costs around £3,500 and so far supporters have raised £700.

Samir said: “With the new ring we will be able to spar again because sparring is the closest thing to the fights.

“We have other gyms coming down too. This is a community gym and they help us so much and I am so grateful for that.”

“We looked online and couldn’t find anything decent cheaper than £3,500 so I suggested a fund page to see what we could raise to help with the costs.”

Premier Boxing has helped get a number of boys off the streets including Samir, who was always in trouble at school until he found boxing.

He said: “There are lads who were similar to me, and they are always being rebellious at school, but they use that energy over here now.

“When you go out you see boys up to no good and I kept myself apart from that and channelled my energy somewhere else.

“I missed school because I was just a naughty kid but boxing opened a lot of doors for me.

“I even left my job for it because I earn money through one-to-one coaching too.”

When Samir’s cousin, Waheed Khan opened the gym in 2013, Samir was one of the first to sign up.

He said: “That is my bread and butter now. I just love everything about boxing so coaching was my way of giving back and helping the kids do something other than aimlessly hanging around.”

Samir was just 12 when he started boxing and was competing by 15. Now he has won five regional titles and was a national finalist.

To donate to the page go here.

Don’t want to vote in person? Here’s how to mail in your ballot

Here’s another stunning picture of Bipasha Basu from her maternity photoshoot that is all heart!
2022-09-03

Apple Supplier Foxconn, Others Hit As India Holds Up Imports From China: Report
2020-07-02