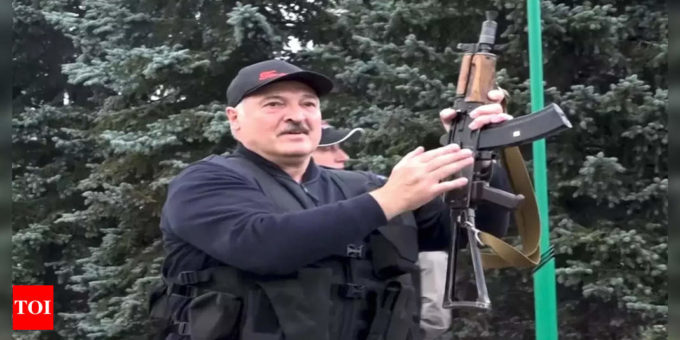 BRUSSELS: The European Union will slap sanctions on Belarus over the migrant crisis in the “coming days”, after the bloc’s foreign ministers gave their backing, Brussels’ top diplomat Josep Borrell said Monday.
After meeting the ministers, Borrell said the new sanctions would hit “quite an important number” of individuals and entities for “facilitating illegal border crossings into the EU”.
“By expanding the scope of the sanctions we will be able to target those responsible for exploiting vulnerable migrants,” Borrell said.
Diplomats said the new penalties are expected to target around 30 Belarusian officials, the state airline and travel agencies accused of helping deliver migrants to the border.
Thousands of mainly Middle Eastern migrants are camped out in dire conditions at the Belarusian-Polish boder, trapped in a perilous standoff with Minsk.
The West accuses Belarusian strongman Alexander Lukashenko’s government of orchestrating the crisis in retaliation for earlier sanctions by encouraging migrants to fly to Minsk and helping them to the border.
Brussels has pushed key transit hubs such as Turkey and Dubai to stop flights to Minsk in order to stem the flow of migrants to the country.
The EU is also pushing the United Nations to step in to offer assistance to the men, women and children at the Belarusian border.
The bloc has already placed 166 people tied to the regime — including Lukashenko and his sons — on a blacklist over a crackdown on opponents since disputed elections last year.