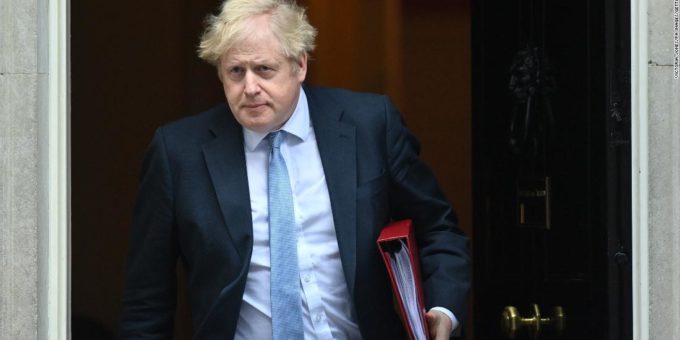 Johnson said he would present the government’s strategy “for living with Covid” when parliament returns from a short recess on February 21.

“Provided the current encouraging trends in the data continue, it is my expectation that we will be able to end the last domestic restrictions — including the legal requirement to self-isolate if you test positive — a full month early,” Johnson told lawmakers on Wednesday.

The requirement for those who test positive for coronavirus to self-isolate is currently due to expire on March 24. Under the current regulations in England, people have to isolate for at least five days if contacted by the National Health Service’s contact tracers and must provide their addresses and the names of people in their household.

Covid-19 infection rates across the United Kingdom have fallen since a peak in early January but remain relatively high. On Tuesday, 66,183 new coronavirus cases were recorded in the UK, with 314 deaths within 28 days of a positive test, according to the latest government data. According to the latest figures from Our World in Data, 72.9% of the population of England is fully vaccinated against Covid-19.

On February 1, Denmark became the first country in the European Union to lift all coronavirus-related restrictions. The Danish Health Minister told CNN that widespread vaccination and boosters had helped the country open up again despite its infection rate remaining high.

While Johnson’s remarks will be welcomed by some in England, coming after nearly two years of coronavirus restrictions, others fear the country may be moving too fast to drop protective measures.

A spokesperson for the UK campaign group Covid-19 Bereaved Families for Justice accused Johnson of “opening the floodgates for Covid-19” while failing to consider the consequences for those most vulnerable to the disease.

“Whilst the Prime Minister is bragging about lifting restrictions a month early, we’re struggling to keep up with the number of hearts that need to be drawn on the Covid Memorial Wall,” said Lobby Akinnola, referencing a stretch of wall in central London where people bereaved by Covid-19 have painted tributes to loved ones.

“The Prime Minister might wish that this disease was no more dangerous than the flu, but the reality is that he is throwing the most vulnerable in our society to the wolves.”

Paul Hunter, Professor in Medicine at the University of East Anglia, told the UK’s Science Media Centre that Johnson’s comments Wednesday were “quite a surprise,” although there were “grounds for optimism” in falling infection rates, particularly among children.

“The concern for me remains our more vulnerable people, especially those who for medical reasons may not have responded as well to vaccine as we would have wished,” Hunter said. “There needs to be robust procedures in place to ensure infections in this group are diagnosed early and antivirals are provided within hours of any positive result.”

Simon Clarke, Associate Professor in Cellular Microbiology at the University of Reading, told the SMC that caution was needed. “If the requirement on infected individuals to isolate at home is lifted as indicated, it will be an experiment which will either be shown to be very brave or very stupid, but nobody knows for sure what the result will be,” he said.

“Omicron may be on the wane in Europe but other parts of the world are still in the full flush of a surge in infections. In such circumstances, as we have seen before, the virus is in the best possible position to mutate again, and there is absolutely no certainty that any new variant would be less dangerous.”

Meanwhile, Johnson came under renewed pressure Wednesday over allegations of lockdown parties at Downing Street after a photograph was published by a UK tabloid newspaper appearing to show him gathering with others in an office setting, with a bottle of champagne. According to The Mirror, the picture was taken on December 15, 2020, when England was under strict coronavirus restrictions.

The photo was published as Johnson appeared in Parliament for Prime Minister’s Questions.

“In the last few minutes, a photo has emerged of the Prime Minister in Downing Street, on the 15th of December 2020, surrounded by alcohol, food and people wearing tinsel… will the Prime Minister be referring this party to the police as it’s not one of the ones already being investigated?” asked lawmaker Fabian Hamilton, of the opposition Labour Party.

Johnson responded: “In what he has just said, I am afraid he is completely in error.”

In a statement released later Wednesday, London’s Metropolitan Police Service said it was reviewing its earlier assessment, on the basis of the evidence available at that time, that the December 15 event did not meet the threshold for criminal investigation.

An investigation by senior civil servant Sue Gray into alleged parties at Downing Street and Whitehall in breach of Covid-19 regulations, released last week, condemned a “failure of leadership” in Johnson’s government. It revealed that police were investigating at least 12 events — including at least two that Johnson allegedly attended — and a third held in his flat that he previously told lawmakers did not happen.
The December 15 gathering was not included in the list of events, published January 31, as being investigated by the police, but was mentioned by Gray in her findings to the Downing Street inquiry.

Officers investigating the alleged parties will send “formal questionnaires” to more than 50 people suspected to have attended these events, police said in an updated statement on Wednesday.

The questionnaire will ask participants for an account and explanation of their participation in the events under investigation. It stressed that the document has “formal legal status and must be answered truthfully” within seven days of receipt.

People who violated Covid-19 regulations at the time could be subject to retroactive fines, if police deem it appropriate, the Met said.

Police also said they were currently examining more than 500 pieces of paper and 300 images provided by the UK Cabinet Office.

CNN’s Stephanie Halasz and Niamh Kennedy contributed to this report.

8 Ways To Get Rid of Laugh Lines