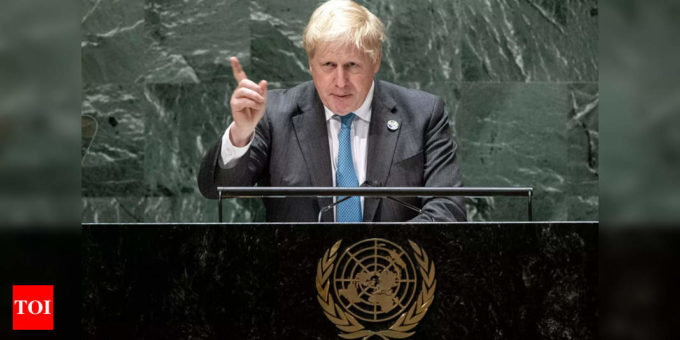 LONDON/PARIS: British Prime Minister Boris Johnson told France on Wednesday to get a grip and give allies in the United States and Australia a break over a row about a trilateral nuclear submarine deal that tore up a separate French contract.
The new defence partnership between Britain, the United States and Australia was announced last week and will give Canberra access to nuclear powered submarine technology.
France accused U.S. President Joe Biden of stabbing it in the back and acting like his predecessor Donald Trump after Australia ditched a defence contract with Paris for the purchase of conventional submarines.
Paris recalled its ambassadors from the United States and Australia, but it has snubbed Britain. It has not mentioned London in any public communication and officials have privately said London’s role was “smoke and mirrors”.
Speaking a day after he met Biden in Washington, Johnson told reporters: “I just think it’s time for some of our dearest friends around the world to ‘prenez un grip’ about all this, ‘donnez-moi un break’, because this is fundamentally a great step forward for global security.”
He was translating the English phrases ‘get a grip’ and ‘give me a break’ literally into French.
“It is not trying to shoulder anybody out, it is not adversarial towards China, for instance, it is there to intensify links and friendship between three countries,” he said.
ANGER
The comments are likely to further fuel Paris’ anger. Two diplomatic sources said there had been instructions to limit contacts with Britain in the immediate term.
“‘Global Britain’, it seems, is aimed at projecting Britain around the world, while marginalising Europe. We can’t accept that,” said one French diplomatic source, referring to a slogan used by Johnson to describe the UK’s ambitions following Brexit.
Britain’s role in pushing the new partnership appears to have been bigger than initially thought, officials have said, with the deal taking shape during a summit of G7 leaders in Cornwall in June that President Emmanuel Macron also attended.
“It’s true that going back on a commitment made and the word he gave is something that Boris Johnson finds hard to see why that would be a problem,” Nathalie Loiseau, former French Europe minister and European lawmaker, said on Twitter.
“This is the whole problem, however, when one claims to want an international order based on rules and relationships based on trust.”
Highlighting the sense of anger felt in Paris – and in a rare reaction of its kind – Macron’s office flatly denied a report published on Wednesday in Britain’s Daily Telegraph saying the president was willing to give up France’s permanent seat on the U.N. Security Council in exchange for the formation of a European Union army.
Neither France’s foreign ministry nor the French presidency was available for comment.