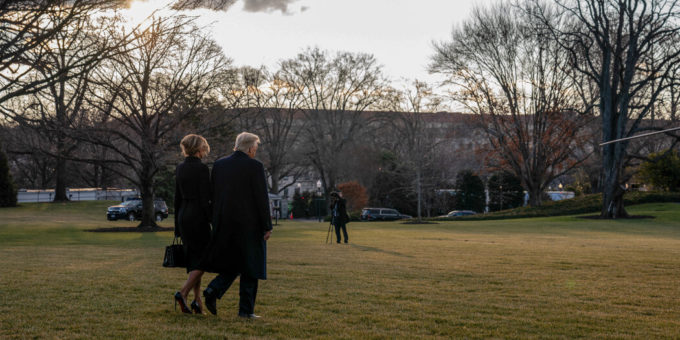 Books like this usually burst out of the gate with a few newsmaking anecdotes, and Wolff does provide some of these. Trump believed that the Democratic Party’s elders would pull Biden, sure to lose, at the last minute, and replace him with a ticket of Andrew Cuomo and Michelle Obama. He toyed with the idea of using the pandemic as a pretext for indefinitely postponing the election. The most notorious line in his speech to the incipient mob on Jan. 6 — “we’re going to walk down to the Capitol” — was an ad-lib, not in the text his staff had prepared. But the strength of “Landslide” comes less from these stories and more from a coherent argument that Wolff, in partnership with his sources, makes about how we should understand the period between Nov. 3 and Jan. 20. Most quickly produced books about political events don’t do that.

Trump, in these pages, is self-obsessed, delusional and administratively incompetent. He has no interest in or understanding of the workings of government. He doesn’t read or listen to briefings. He spends vast amounts of time watching conservative television networks and chatting on the phone with cronies. The pandemic puts him at a special disadvantage; many of the people around him are either sick or afraid to come to work because that would entail complying with a regime of Covid noncompliance that Trump demands. If anybody tells him something he doesn’t want to hear, he marginalizes or fires that person and finds somebody else to listen to, who may or may not hold an official position. If Fox News becomes less than completely loyal, he’ll switch to Newsmax or One America News Network. He lives in a self-curated information environment that bears only a glancing relationship to reality.

Before the belief that the election was stolen had taken full control of Trump’s mind, the idea was already there — because he chose to regard all forms of expanded access to voting, which tend to favor the Democrats, as stealing. He turned down entreaties from his staff to set up a Republican get-out-the-early-vote operation, just as he also turned down entreaties to endorse masking and social distancing during the height of the pandemic: off-brand. He was utterly disorganized, with endless firings and reshufflings of the key players. And during his second impeachment trial, Trump was represented by a comically incompetent, squabbling team of lawyers whom he had barely met.

In the early hours of election night, when he was running well ahead of the pre-election polls, Trump decided he had won. After it became clear to everyone but him that he hadn’t, he empowered an alternate-reality team of advisers, headed by Rudy Giuliani and including people whom even Giuliani considered to be unacceptably out-there, like Sidney Powell, the freelancing lawyer, and Mike Lindell, the C.E.O. of MyPillow, and he embraced every available conspiracy theory and strategic fantasy about how he could change the result. To Trump, in Wolff’s telling, elections are roughly similar to the due dates for loans in his real-estate business — a place to start negotiating. Because he divides people into two categories, strong and weak, and because he has the deep cynicism of an unprincipled person, he chose to believe that he was not the first result-denying presidential candidate, only the first who was manly enough to challenge a typically corrupt outcome.

Nobody holding official power in the White House or the Republican Party — in particular, Mike Pence and Mitch McConnell — took Trump’s ravings seriously, so the horrifying events of Jan. 6 came as a surprise, probably even to Trump himself. The various rallies that day had been organized by independent right-wing political entrepreneurs with businesses to promote, not by the White House, and it wasn’t yet clear to most Republicans in Washington how fully Trump’s followers had accepted his insistence that the election had been stolen. Almost nobody in the White House was actively trying to persuade members of Congress to vote for the election challenges that were before them on Jan. 6.

Man in China reunited with son snatched 24 years ago