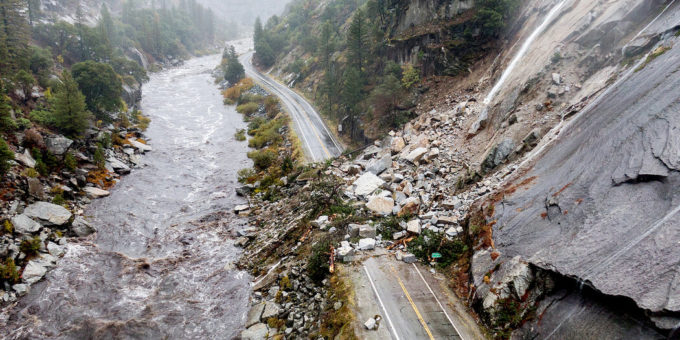 The California Governor’s Office of Emergency Services said on Twitter early Sunday that it was monitoring burn scars in Kern, Santa Cruz and El Dorado Counties. “Excessive rainfall” over El Dorado County’s burn scar, which was caused by the Caldor fire, could cause life-threatening flash floods, the National Weather Service in Sacramento said on Sunday morning.

As of 2:15 p.m. local time on Sunday, at least 130,000 utility customers in the Bay Area had lost power, said J.D. Guidi, a spokesman for Pacific Gas and Electric. About two-thirds of those outages were reported on the San Francisco Peninsula and in Sonoma and Marin Counties.

The utility said that more than 3,000 workers and contractors were ready to help restore power.

At San Francisco International Airport, 139 flights had been delayed and 52 others had been canceled as of 10:10 a.m. local time, said Cathy Morrison, an airport duty manager.

“The atmospheric river is aiming a fire hose, if you will, into our area,” Sean Miller, a meteorologist for the Weather Service in Monterey, Calif., the forecast office for the Bay Area, said on Sunday.

An atmospheric river is a concentrated plume of moisture that extends over the ocean, typically in the troposphere, the lowest layer of the atmosphere, Mr. Miller said. The current trough was angled toward the North Bay, he said.

In the Pacific Northwest, a bomb cyclone, a type of storm known for its falling atmospheric pressure, was expected to push the atmospheric river south, affecting areas south of San Francisco, Mr. Miller said.

“This is more typical of something we tend to see in December or January,” he said, pointing out that the confluence of the two meteorological phenomena was “anomalous.”