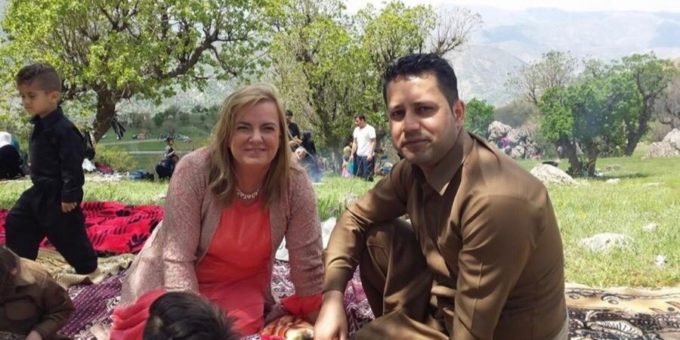 An Iraqi worker who found a WW2 bomb has spoken about his life growing up in a dictatorship regime.

Aram Mahmoud from Iraq and now living in Bolton, dug up the unexploded bomb on Bradford Road, and was not surprised, as he had seen many before in his home country.

The dad-of-two left Iraq where he spent his childhood years until 2002 when he was 17.

He lived in the city of Kirkuk, in the North of Iraq where bloodshed among civilians caught up in Saddam Hussein’s war was common.

He said: “It was really bad there growing up there.

“I remember one of my uncle’s sons touched a bomb, it exploded, and he died, and the other boy lost an eye and injured his leg badly.

“It was not the first time we played with bombs, as we would see them a lot, and because we were young, we would go near them, touch them and try to take them apart, we didn’t realise the danger.

“My family took me to another village that day or I would have been caught up with the bomb too.”

Kurdistan is one of the largest stateless nations in the world, with a population of over 20 million.

It is split into two states, one part of Iran, and the other in Northern Iraq.

Mr Mahmoud says he hopes one day his home town can become part of its own nation, and the fighting will cease.

Life in Kirkuk was far from easy, and Mr Mahmoud’s family often had to run from their home when the fighting came to their town.

He said: “We had to leave every few months because of the fighting.

“I remember people were running, leaving everything behind in their homes, just like us.

“Many would even leave their kids if they could no longer carry them, dumping new born children on the ground and other people leaving old parents, hoping someone else would pick them up.”

Mr Mahmoud also remembers the Halabja gas attack, in which around 5,000 people were deliberately killed when a poisonous gas was released in the town.

He said: “Many died of chemical poisoning and cancer, the effects of which are still being felt today.

“Even if they had babies they would either die or be born with disabilities.”

A dad himself, Mr Mahmoud’s own dad was forced to join the army, and not allowed to return for some years.

It was not an option and refusing to go risked being killed.

Mr Mahmoud is one of nine siblings, and says it was hard for his mum to look after everyone.

Now, the 37-year-old has since taken his own two children, 10-year-old Ari and nine-year-old Adam with wife Frances Kenny, to his hometown, where his family still live.

He said: “My kids know the history of Iraq, they have since been there too and I am proud of them.

“We are still fighting for freedom, but it is better than before and my family there are safe.”

Mr Mahmoud now works in a restaurant, but in 2002 first worked in a fibre glass factory, and in 2008 opened a restaurant, before quitting and running a shop with wife.

But after their son Adam was born with Down Syndrome, the couple closed their shop to focus on looking after him.

Wearing a Mask? It May Come From China’s Controversial Labor Program
2020-07-20