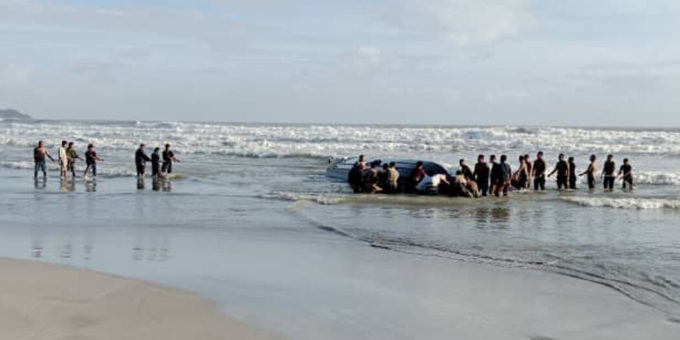 KUALA LUMPUR, Malaysia — At least 10 people were killed and 29 others were missing after a boat carrying at least 60 Indonesian migrants sank in the South China Sea before dawn on Wednesday, Malaysian officials said.

The boat capsized in bad weather around 4:30 a.m. off the coast of Tanjung Balau, a beach town in the southeastern Malaysian state of Johor, a spokesman for the country’s Maritime Enforcement Agency said.

Twenty-one people were rescued after the agency deployed a helicopter and two boats for a search-and-rescue operation just before 9 a.m., the spokesman, Nurul Hizam Zakaria, said.

Bernama, Malaysia’s national news agency, posted a photo on Twitter that it said showed people on a beach recovering the capsized boat from the surf.

A spokesman for the Malaysian Army’s Third Infantry Division later said that all of the passengers onboard were Indonesian. He said they had sailed from the Indonesian island of Batam, which borders the Singapore Strait.

Batam is close enough to Singapore and neighboring Malaysia that until the pandemic it had been connected to the city-state by regular ferry service.

Boat accidents are common in the region, and some have involved Rohingya refugees.

Over the years, thousands of Rohingya people have attempted the perilous crossing by boat to Malaysia from Myanmar, where they face ethnic persecution, or from Bangladesh, where they often live in poverty. They typically head southeast through the Straits of Malacca to Malaysia’s west coast.

Malaysian officials have sometimes prevented such refugee boats from docking. Last year, one of them was rescued by the Bangladeshi Coast Guard, and officers found hundreds of malnourished and dehydrated people who had been kept in the boat’s hold by human traffickers.