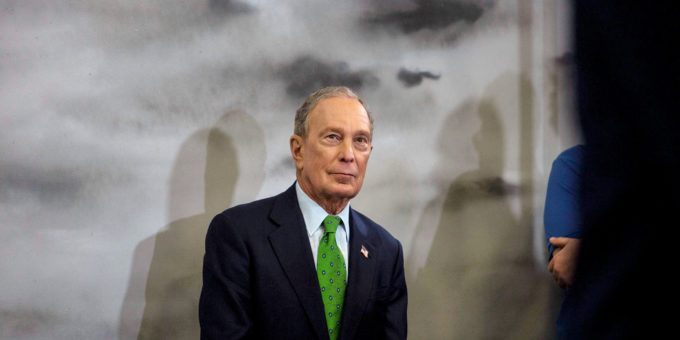 WASHINGTON — Former Mayor Michael R. Bloomberg of New York unveiled a plan on Saturday that would raise an estimated $5 trillion in new tax revenue from high earners and corporations, a proposal that would almost certainly raise his personal tax bill but is less aggressive than those from his most liberal rivals for the Democratic presidential nomination.

The proposal includes a repeal of President Trump’s 2017 tax cuts for high earners, along with a new 5 percent “surcharge” on incomes above $5 million per year. It would raise capital gains taxes for Americans earning more than $1 million a year and maintain a limit on federal deductions of state and local tax payments set under the 2017 law, which some Democrats have pushed to eliminate.

For high-earning owners of businesses that are not organized as corporations, it would repeal a tax deduction granted by the Trump tax cuts — and it would partially repeal Mr. Trump’s income tax cuts for corporations, raising their rate to 28 percent from 21 percent. Before 2017, the top corporate rate was 35 percent.

But the plan notably does not endorse the so-called wealth tax favored by several of the more liberal candidates in the race, like Senators Elizabeth Warren and Bernie Sanders. Such a tax has gained popularity among voters, but Mr. Bloomberg’s advisers believe it could be ruled unconstitutional — a concern shared by some progressive legal experts.

All told, Mr. Bloomberg’s advisers estimate his increases would add up to $5 trillion of new taxes spread over the course of a decade, in order to finance new spending on health care, housing, infrastructure and other initiatives. That amount is nearly 50 percent larger than the tax increases proposed by the most fiscally moderate front-runner in the race, former Vice President Joseph R. Biden Jr.

Mr. Bloomberg’s advisers said it was possible that he would propose additional measures to raise even more revenue, depending on how his other domestic spending plans develop. They said he did not plan to devote any revenues to reducing the existing $1 trillion deficit, which they said he views as a long-term problem but not an immediate one.

Mr. Bloomberg, whose worth is estimated at more than $50 billion, is spending hundreds of millions of dollars of his personal fortune to compete in a race he entered much later than his leading opponents. He is still detailing his agenda, even as those opponents compete in the early-state primaries that Mr. Bloomberg has bypassed. Instead he is planning to focus on states that will hold their elections later in the primary calendar.

The tax plan comes at a crucial moment in Mr. Bloomberg’s candidacy: He is increasingly seen as a plausible contender for the nomination, and his national poll numbers have risen to the high single digits on the strength of an advertising onslaught funded from his personal fortune.

But Mr. Bloomberg’s extreme wealth has also made him a figure of suspicion to many Democrats, who are intensely concerned about economic inequality; some of his most prominent rivals in the presidential race, including Mr. Sanders and Mr. Warren, have accused him of seeking to buy the White House.

Mr. Bloomberg has attempted to allay those objections in part by promising to raise taxes on people like himself: He opposed the passage of Mr. Trump’s tax cuts in 2017, and on the day he entered the presidential race he called for tax increases on the wealthy. He has highlighted that stance in television commercials, but until now he did not describe in detail how he would seek to make the rich pay more.

He has also repeatedly deferred steps that would give voters and the news media more visibility into his personal finances, putting off the filing of his personal financial disclosure form until late March and declining so far to say when he intends to release his tax returns. While Mr. Bloomberg would certainly pay more under his own tax plan, his campaign declined to specify how much and said that no such assessment had been made.

“Right now, I give nearly all of my company’s profits to charity,” Mr. Bloomberg said in a statement on Saturday. “Under my plan, I’ll continue doing that — but I will also pay more in taxes to make sure all Americans have the same opportunities I did. That’s only right.”

Some New Yorkers would very likely pay more under Mr. Bloomberg’s plan than Mr. Biden’s. That is in part because Mr. Bloomberg would maintain the so-called SALT cap on state and local tax deductions, which hits residents of high-tax states, like New York, especially hard. Mr. Biden would repeal the limit, which is set at $10,000 per year. Mr. Bloomberg’s advisers say such a move would largely benefit higher-income taxpayers, and thus run counter to Mr. Bloomberg’s goal of increasing the progressivity of the tax code.

It remains to be seen whether Mr. Bloomberg’s tax proposals will succeed in satisfying liberal voters, or in blunting criticism of his tycoon status. Though he is facing skepticism from progressives, his stature as a business executive could also give his arguments about taxes and the economy additional weight with other voters.

Mr. Bloomberg’s campaign hopes that he will be able to displace Mr. Biden as the leading moderate in the race, if Mr. Biden falters in Iowa and New Hampshire. But advisers also see it as an urgent priority to win over at least some distrustful constituencies on the left, in order to stop a candidate like Mr. Sanders or Ms. Warren from gaining runaway momentum.

Mr. Sanders and Ms. Warren have proposed many of the tax increases included in Mr. Bloomberg’s plan, and they have gone further; both support returning the corporate rate to 35 percent, for example. Mr. Sanders and Ms. Warren — along with a third candidate, the former hedge fund investor Tom Steyer — have also called for a wealth tax on the largest private fortunes, of the kind Mr. Bloomberg opposes.

Censorship claims emerge as TikTok gets political in India

Egypt sentences officer-turned-militant and 36 others to death

Cardi B receives expensive handbag from Offset; you won’t believe the price
2021-02-16