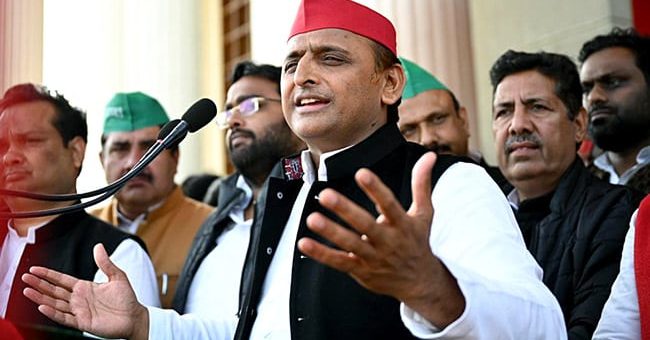 Bristling at Prime Minister Narendra Modi’s remarks accusing him of “fake Samajwad” that he said was actually “parivarvad” (nepotism), Samajwadi Party chief Akhilesh Yadav on Thursday tore into the BJP government in Uttar Pradesh saying since it was run by “people who do not have a family” they did not understand the suffering of others.

He also accused the BJP of reneging on its promises made before the last elections in 2017.

“I want to say that only those who have families can understand the pain of a family, but not those who do not have a family. BJP should observe two minutes of silence for their last manifesto as they could not fulfil the promises made five years ago,” Mr Yadav told news agency ANI.

“We are proud to have families. A family person will not run away with jhola (bag) and leave family behind. During the lockdown, if the Chief Minister had a family, he would have understood the pain of labourers walking miles to reach their home,” the Samajwadi Party (SP) leader added, in a dig at the PM’s famous catchphrase of being a “fakir” (ascetic) who would walk away one day with just a jhola (satchel).

Lashing out at BJP on the “double engine” slogan, the former Uttar Pradesh Chief Minister said the crucial elections that began on Thursday were to save the constitution and democracy.

The SP chief raised concerns over the reports of EVMs not functioning properly at several booths during the polling.

“There were several reports that EVM was not functioning properly, voting was stopped for hours and people had to wait to cast their votes. The preparation for a fair election should have been done by Election Commission to ensure smooth voting,” he said.

Asked about the Allahabad High Courts granting bail to the prime accused in Lakhimpur Kheri violence Ashish Mishra, Akhilesh Yadav said, “Government should have ensured strict punishment, but it failed. The world has witnessed the incident that took place in Lakhimpur Kheri. Everyone is well aware of the fact that BJP was responsible for the death of the farmers.”

Akhilesh Yadav’s remarks follow Prime Minister Narendra Modi launching a scathing attack on “dynastic politics” saying “it is a big threat and biggest enemy of democracy” and severely compromises on the talent coming into a political party.

Irrfan Khan’s Angrezi Medium to get a digital release next week? : Bollywood News
2020-04-02