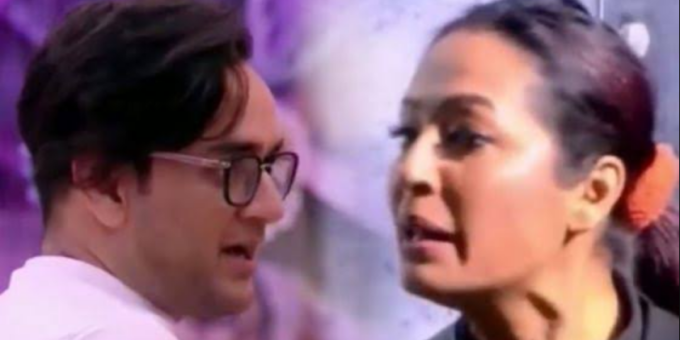 As the episode begins, the housemates are sitting outside. Vikas Gupta teases Asim Riaz that the song “Koi Mil Gaya” played for Vikas and Himanshi Khurana, because they met outside the house.  Vikas tells Asim that he can win the trophy, Vikas will win Himanshi.  Shefali Jariwala and HImanshi Khurana talk about HImanshi’s meeting with Vikas outside and Himanshi says a hashtag has been created for them.  Shehnaaz Gill comes out of the bathroom to tell Sidharth Shukla that she was missing him and he teases that she needs to be alone sometime too.

Himanshi is seen talking to Arti Singh and Kashmira Shah about her past relationship.  She tells them that Shehnaaz and Sidharth’s words are what ended her relationship, because Shehnaaz said she is in touch with Himanshi’s ex and mother in law.  Himanshi says she went over there and fought with them, because they were backstabbing her by being friendly with Shehnaaz after the controversy.  She clarifies that Salman Khan was wrong, Asim was not responsible for her breakup, but they were.

Vikas and Himanshi are in bed teasing Asim still and Asim asks them to stop and he will keep away, because it’s getting to him.  Asim tells them that this is how he is and he will stay away if they are going to trigger him.  After coming out of the bathroom, he hears Himanshi and Vikas giggling and tells them that it’s Vikas and Himanshi’s fault and they need to stop dragging it.  Vikas gets upset and walks away, saying he’ll stay away and Himanshi says it’s too embarrassing and apologizes to Vikas.  Himanshi and Asim fight over this.  Sidharth tells Vikas to stop getting in to Asim’s business and purposely poke him and keep away.

Paras Chhabra announces the new task.  The housemates are to re-enact dialogues said by housemates that are popular outside the house.  Team A has Mahira Sharma, Paras, Rashami Desai and Sidharth.  Team B has Asim, Shehnaaz, Vishal Aditya Singh and Arti.  The Vivo phones will be the prize.

Rashami and Sidharth imitate Vishal and Madhurima Tuli’s fight and Madhurima hitting Vishal with the pan.  Sidharth throws water on Rashami, imitating the fight, but asks for more retakes to get Rashami wet and has a good laugh.  Rashami accidentally hits Mahira with the pan during this. Mahira recreates Asim’s rapping with Rashami and Sidharth reacting in the background.  Mahira and Paras act like Shehnaaz and Sidharth, copying their conversation in English.

Vishal and Shehnaaz imitate Mahira and Paras kissing and Arti jumps in as well.  Shehnaaz, Asim and Vishal enact Arti’s comedic stand up.  In the bedroom, Devoleena Bhattacharjee teases Rashami and Sidharth about hanging out after the show is over and Rashami sarcastically says that yes, they will go for long drives together.  Outside, Vishal, Arti and Asim enact Sidharth and Rashami’s sequence from “Dil Se Dil Tak,” but Rashami tells Sidharth and Devoleena that they’re supposed to recreate it, but they’re changing it.  Sidharth tells Devoleena to use that in judging.  After Sidharth leaves the room, Devoleena tells Rashami that she believes they could be good friends and Rashami says they’re being nice to each other, what more can she do?

Sidharth tells Arti that she was just acting like Rashami, so she should put all the tea leaves back from where she got them.  Shehnaaz asks Sidharth if he will eet her outside the house, because people say he doesn’t meet a lot of people outside.  He says she will be in Punjab and he will be in Mumbai and she says she will come to Mumbai.  Sidharth says she will end up finding someone else and Shehnaaz says she won’t talk to him.

The housemates gather in the living area and watch the videos, cheering and enjoying them.  However, because the judges (connections) are unable to come to a decision regarding whether the housemates could add their own twist to the recreations or not, Bigg Boss says he cannot declare a winner.  Later, Himanshi tells Shehnaaz that she’s going to cut out a photo from her frame, because that makeup artist is the one who made the two fight.  Shahbaaz Gill sits there and talks to Himanshi about it and she tells him how this man instigated the two against each other.  Shehnaaz jokes that Himanshi will be her manager outside.

The housemates are eating and Kashmira asks Vishal about the horse task and he admits to getting up.  Sidharth tells that Rashami admitted it even then and Vishal says that she will switch her statement as needed.  Sidharth jokes that she’s a snake that keeps biting.  Rashami gets upset and talks to Asim and Himanshi about it, saying she doesn’t turn away from her words.  She calls Vishal over and confronts him.  He tells her he was joking, but she says it was not okay.  He tells her that she made fun of the pan incident in front of everyone too.  Vishal hugs her and they make up.

Kashmira and Rashami clear up some issues they have had regarding Arti.  Arti and Rashami talk, but the two continue fighting, saying Arti will hold grudges going out of the house.  Arti says that Rashami has never been there for her in the house.  Shehnaaz is talking to Vikas, Shefali, Sidharth and others and Shehnaaz talks about how nice Sidharth’s breath smells.  Shehnaaz asks what it means when Shehnaaz calls her a work of art?  Shefali says unique, but Shehnaaz says he’s being sarcastic.

A new day begins and Sidharth tells Asim to use the tea leaves sparingly as it’s being wasted.  Mahira tells Asim that there’s elaichi already in the tea, so stop using extra.  The two get into a fight over this and Asim tells Mahira that the ration is for using, but she says that the elaichi should not finish.  Kashmira and Arti are seen strategizing for the task and Kashmira tells Arti that she cannot save Sidharth, because Vikas is her direct competitor.  Shahbaaz jokes in front of Rashami, Sidharth and others that their father told Shehnaaz to stay away from Paras and she promised and then spoke to Paras as soon as their father left the house.  He jokes that she makes false promises and Rashami asks if he’s here to strengthen or weaken her game?

Devoleena tells Rashami that Sidharth looks genuine in the house and she hates Paras and Mahira.

A new task is announced for captaincy.  The housemates will be workers in a money printing factory.  The contestants will print notes and one contestant will throw it on the other side of the wall.  Connections will gather the notes and place them in the safe.  The team with the most notes will choose to remove a contestant from the task.  The two connections with the most notes will get a special advantage.  Vikas strategizes with the housemates and clarifies the rules.  Shefali, Akash, Vikas, Shahbaz and Kashmira team up and plan to eliminate Rashami, Asim and Vishal from the game before moving on.

Shehnaaz argues that she wants Mahira and Paras eliminated first as they are weak, but Sidharth puts up a fight for them.  Vikas and Shefali plot separately and Vikas tells Shefali that the others don’t trust her.  Meanwhile, Arti tells Sidharth that she understands Shehnaaz’s point of view and says she doesn’t want to be captain, but Sidharth gets angry and tells her to keep her mouth shut.  Kashmira, Shahbaaz and Kunal discuss that they do not trust Vikas.  While the three are talking, Vikas comes and tells Kashmira and Shahbaaz that they are moving as discussed, but Kashmira says that Shahbaaz is not sure.  Vikas gets upset and storms off, calling Shahbaaz a flip.  He storms in where Sidharth and Shehnaaz are discussing and Sidharth tells him that this is why he should listen to him before planning.  Sidharth fights with Shehnaaz and tells the others to play and die for themselves.

Shahbaaz joins hands with Himanshi and Kunal while Sidharth and Shehnaaz continue fighting.  Shahbaaz comes in to talk and tells Sidharth that Vikas is not trustworthy, but Sidharth tells him that Vikas is not playing according to Sidharth, so if he can’t trust him, then don’t play with him.  Kashmira joins hands with Kunal and Himanshi and Vikas tells everyone, including Kunal and Himanshi, that Shahbaaz and Kashmira will go first.  Kashmira gets angry and fights with Vikas when he tells Arti he won’t save her.  Shefali tries to interject, but Kashmira tells her off and tells Vikas to stay away from her family.

The task continues tomorrow and with Vikas set to steal Shahbaaz’s team’s money, the contestants will get heated.

Amid Slowdown, Nirmala Sitharaman To Reveal Her Second Budget Today