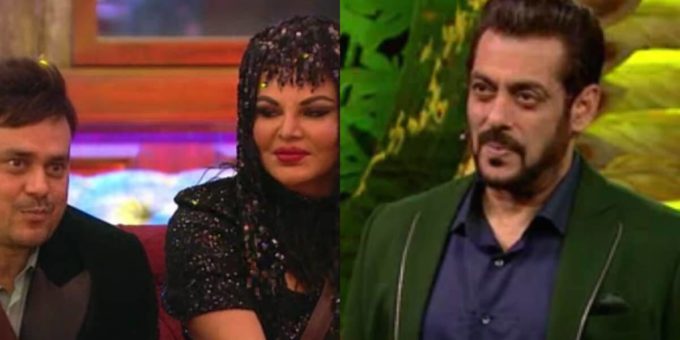 Actor Rakhi Sawant took everyone by surprise when she entered the Bigg Boss 15 house as a wildcard with her husband, Ritesh. Fans flooded social media with screenshots of Ritesh, taken from the live feed, while many remained sceptical. On the latest episode, host Salman Khan quizzed Rakhi about Ritesh as well. Rakhi has been talking about Ritesh since 2019, but many have remained dubious about her marriage.

Salman welcomed the wildcard entries and then asked Rakhi who the man next to her was. He also said that no one believed that she was actually married, and that she had now proved everyone wrong. “Is he really your husband, or have you hired him,” Salman asked. Rakhi immediately said, “No, no, he is my ‘pati parmeshwar, my only husband.” Rakhi then introduced Ritesh to his ‘brother-in-law’.

Ritesh introduced himself to Salman Khan, and said, “Rakhi never lies. Whatever she has said, it’s 100 percent true. It was my fault that I couldn’t accept her before, as I was too cautious with my profession and asked her to hold off. It was Rakhi’s maturity to adhere to this, and I asked her to not make my photos viral, and she had to face a lot of insults because of this.” Ritesh also mentioned that he is a software professional from Bihar, and currently lives in Belgium.

An impressed Salman said, “Okay Rakhi, this is actually your husband.” Ritesh then went down on his knee and promised to be Rakhi’s husband for the next seven lives.

In an exclusive chat with Indian Express, Rakhi had opened up about Ritesh and said that he looks like actors Arjun Kapoor, Tiger Shroff, Shahid Kapoor and Ranveer Singh. She added, “I never thought he would come with me but when he agreed, I knew this was the chance to reveal him to the world. I am so proud of him, and also excited about our new journey. I am entering as a wife this time, so let’s see how it goes.”

Suniel Shetty becomes emotional visiting the cinema during Tadap shoot where his father ‘started his life in canteen’ : Bollywood News