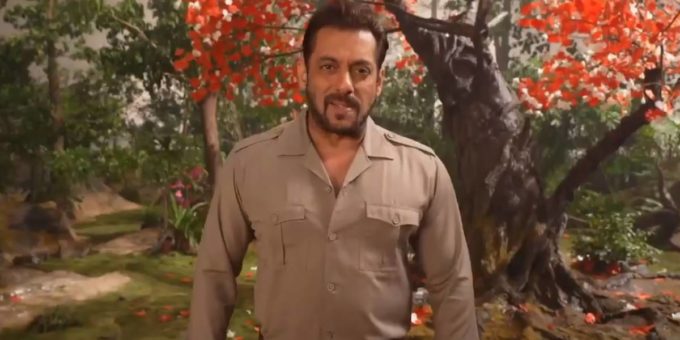 Television’s most popular reality show Bigg Boss is all set to grace the small screen soon. The fifteenth season of the Salman Khan-hosted show will go on air on October 2 on Colors. But before we get to witness the entire drama unfold on our TV sets, Salman is here to tell us all about it in a press meet. So, stay tuned with us to know what you can expect from the all-new season of Bigg Boss.

The first promo of Bigg Boss 15 featured Salman along with a voiceover from yesteryear diva Rekha. The promo left fans excited and intrigued about the set-up of the show. From the short clip, it was clear that before entering the luxurious and beautiful Bigg Boss house, the contestants had to survive in a jungle-like set-up where probably they will be barred from using basic amenities.

Talking about her maiden association with Bigg Boss, Rekha had said in a statement, “Bigg Boss is a very ‘naayab’ show, that has it all, drama, action, fun and thrill and what’s more, you get a crash course of life itself. And if one is patient and resilient, one will evolve to be one’s best self! What could be better poetic justice than that. I am glad to be collaborating with COLORS for the promos of Bigg Boss 15. It is going to be an exciting new experience, as I am doing a Voice Over for a ‘speaking tree’ whom Salman has fondly named ‘Vishwasuntree’, a vibrant tree full of wisdom, hope and faith.”

While we are yet to know the name of the confirmed contestants, Bigg Boss OTT finalist Pratik Sehajpal is sure to enter the house. During the finale of Bigg Boss OTT, Karan Johar offered the housemates a chance to pick up a briefcase, which had the opportunity to get a straight entry into Bigg Boss 15 house. Pratik picked up the briefcase and confirmed his place in the Salman Khan show. The other names which are expected to be on the show are Karan Kundrra, Ronit Roy, Arjun Bijlani, Reem Shaikh, Nidhi Bhanushali and Umar Riaz.

The grand premiere of Bigg Boss 15 will air at 9:30 pm on Colors TV. The reality show will then air at 10:30 pm from Monday to Friday.

Opinion | Alexa, Why Can’t You Understand Me?