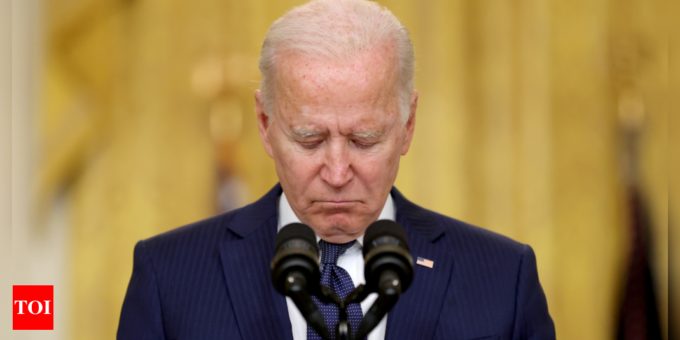 WASHINGTON: In remarks that startled diplomatic and geo-political circles, US President Joe Biden on Wednesday seemed to acknowledge the inevitability of Russia invading Ukraine, while suggesting that Moscow could get away with a minor incursion if NATO allies are divided.
“I think what you’re going to see is that Russia will be held accountable if it invades. And it depends on what it does. It’s one thing if it’s a minor incursion and then we end up having a fight about what to do and not do, et cetera,” Biden said during a White House press conference, appearing to suggest that only a full blown military invasion will result in punitive western response.
“Militarily, they have overwhelming superiority, and on — as it relates to Ukraine. But they’ll pay a stiff price — immediately, near term, medium term, and long term — if they do,” Biden warned.
The comments so surprised journalists that follow-up questions centered on whether he was giving Russia a green light for a minor incursion.
“Good question. It did sound (like) that, didn’t it…” the US President said, while asserting that Russian forces crossing the border and killing Ukrainian fighters “changes everything,” suggesting Moscow could get away with actions short of that.
“But it depends on what he does, as to the exact — to what extent we’re going to be able to get total unity on the NATO front,” he added.
The White House later clarified Biden’s loosely worded remarks, saying he would treat any Russian move over the border as an invasion.
“If any Russian military forces move across the Ukrainian border, that’s a renewed invasion, and it will be met with a swift, severe and united response from the United States and our allies,” the White House said, adding that cyberattacks and paramilitary action might be treated differently, “with a decisive, reciprocal, and united response.”
Biden also framed the Russia-Ukraine developments in a historical context, saying Putin “is dealing with what I believe he thinks is the most tragic thing that’s happened to Mother Russia — in that the Berlin Wall came down, the Empire has been lost… Soviet Union has been split.”
“He is trying to find his place in the world between China and the West,’’ the US President explained.
Biden also appeared to make concessions to Moscow on two of its key demands to ward off what some American officials have said could be an imminent invasion of Ukraine: Not stationing strategic weapons in Ukraine and not roping Kiev into Nato.
“Something could be worked out” on the strategic weapons issue depending on Russian actions on its borders, Biden said. Ukraine joining NATO in the near term is also “not very likely” he added, saying it admission would be “based on much more work they have to do in terms of democracy and a few other things going on there, and whether or not the major allies in the West would vote to bring Ukraine in right now.”
“So there’s room to work if he wants to do that. But I think, as usual, he’s going to — well, I probably shouldn’t go any further. But I think it will hurt him badly,” the US President concluded with an air of resignation.

Service member killed during mission in Iraq, US military says
2019-08-10