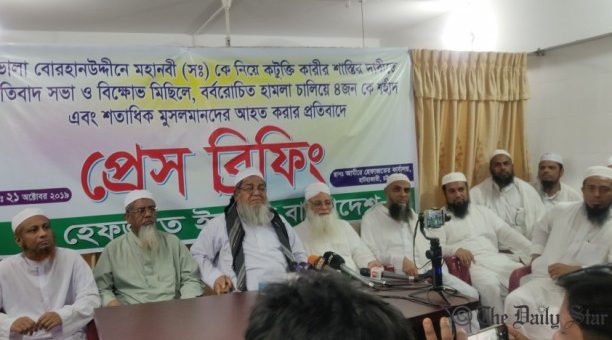 Hefazat-e-Islam today announced a nationwide protest programme to press home their demands including punishment of the police personnel “responsible for the death of four people” during a clash in Bhola yesterday.

Their demand also includes “punishment of the person who put the hate-post on Facebook and compensation for the families of those who were killed and injured during yesterday’s clash”.

Babu Nagari during his speech said that Hefajat conducted an investigation regarding the “hate conversation” in question.  The investigation found that it was done deliberately by the owner of the Facebook profile himself and no hacking took place, he claimed.

“We are forming a five-member probe body to conduct deeper investigation into the issue,” Babu Nagari added.

Babu Nagari also said that if the government would have accepted the original 13-point demand by the islamist group, such incident would not have occurred as one of the demands was death penalty for anybody criticising Islam and rasul.

“If the 13-point demand were accepted, Bangladesh would have turned into a heavenly place,” Babu Nagari said.

At least four people were killed and more than a hundred others injured yesterday as religious zealots clashed with police in Bhola’s Borhanuddin upazila over a hate conversation spread through Facebook and its messenger.

Mamata Banerjee In Birthday Message To Farooq Abdullah: We Stand By You