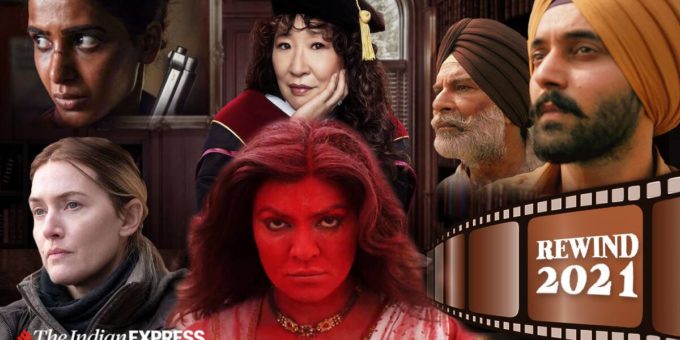 It’s taken me less than a year to go from someone who didn’t take web-produced ‘content’ seriously (how can anyone take anything as generic as ‘content’ seriously?) to be the person who has acknowledged that amongst the best stories we watched in 2021 were those that streamed on OTT platforms. This was the year that the web came sharply on the government’s radar: being able to tell the tales that streaming platforms were meant to may never be as free again, especially after the shenanigans that took place post ‘Tandav’. Will the creators learn how to cleverly subvert and carry on as they are meant to?

My top picks are a medley, chosen not just for their strong plot-lines and nifty story-telling, but for some of the most interesting faces I encountered this year.

Season 2 of Gullak reunited us with the Mishra family, and their trials and travails involving, among other things, middle-class thrift, keeping up with the neighbours, and maintaining a united front. What do the terrific duo of Geetanjali Kulkarni, one of India’s best actors, and Jameel Khan, and their sons-looking-for-a-better-life, have in store for us in Season 3?

Bombay Begums is about a bunch of Mumbai women who inhabit different strata, from boardrooms to corner offices to chawls. Directed by Alankrita Srivastava, not all of it lands with the same force, but in the time of MeToo and other intractable struggles that women go through on a daily basis, anything which tries to get us to shift our gaze, from where it has been to where it should be, is welcome. Pooja Bhatt, Shahana Goswami, Plabita Borthakur play their parts well, and I will watch anything with the terrific Amruta Subhash in it.

Manoj Bajpayee understandably toplined Raj and DK’s spy saga The Family Man season 2, and he’s always a pleasure to watch, but this season belonged to Samantha Ruth Prabhu. Her rebel-with-a-cause-Raji channels pain and determination in equal measure, making her a worthy antagonist. Srikant Tiwari, consequently, has his hands full.

Both Aarya season 2 and Aranyak had its moments. What I will take away from the second season of the Sushmita Sen starrer is the final episode which got every beat right. And from Raveena Tandon’s comeback show are moments when she settles in, giving her co-star Parambrata Chattopadhyay a look, both a challenge and an acknowledgement; the other set-in-the-hills-supernatural-thriller ‘The Last Hour’ also had a series of atmospheric moments, and a story which felt like it had been worked on, with an equal partnership between new arrival in town Sanjay Kapoor and local cop Shahana Goswami.

The best of the lot is a toss-up between Ajitpal Singh’s ‘Tabbar’, and Anirban Bhattacharya’s ‘Mandaar’, a Macbeth remake which had me riveted right through its length. Both are beautifully written, both completely understand their milieu, and both have stories which resonate.

The redoubtable Pavan Malhotra’s retired cop is a family man too, and will do anything to save his ‘tabbar’ from breaking into pieces. Ranvir Shorey, as the head of a wealthy family involved in dodgy doings commands attention too. As do the fresh-faced youngsters who criss-cross the screen. Drugs, drug-runners, and corporate thugs enter the picture. We get an inside view of how deep ‘peela’ (the Punjabi word for the lethal powder) has got into the victims’ veins, and how, finally, when it comes right down to it, your family is the only thing that will stand by you.

I haven’t been able to shake off the vividly-realised, visceral Macbeth-remake-in-Bengali ‘Mandaar’, which I watched a few weeks ago, from my mind. A tiny coastal village in Bengal, Geilpur, becomes the site of a power-struggle between a wealthy man and his entourage — a wily yes-man, a bratty son, a long-suffering wife — and one of his most loyal men.

There’s your Dablu Bhai/Duncan ( Debesh Roy Chowdhury), and Mandaar/Macbeth ( Debashish Mondal), and there’s your conflict. The latter is taunted by his wife (Sohini Sarkar) for not being man enough, just the way Lady Macbeth did in the Shakespearean original; ironically, the man who sates her sexually is also the one who has to be got rid of. Bhattacharya, who also acts, playing his part of a creepy cop with smiling relish, creates an atmosphere simmering with dread, and characters haunted by their deeds. Prophecies, witches, nightmares and death: this is a Macbeth to remember.

My top international picks include Scenes From A Marriage. Fans of the 1973 Ingmar Bergman original will remember the sharpness with which it explored a marriage on the brink. The 2021 HBO miniseries starring Oscar Isaac and Jessica Chastain, directed by Hagai Levi, doesn’t rub the skin off your bones, but it does manage to examine just how things can turn rancid between a once loving couple. That may have been then, and this is now, but that thing between men and women? Never-ending.

Sandra Oh breaks many glass ceilings in ‘The Chair’, created by Amanda Peet and Anne Julia Wyman : she is the first woman to head the English department of a tony college in the US, a less than tiger mom to her adopted daughter, and an on-and-off companion to a confused White academic colleague. What keeps her, and the other characters in this delightful series from turning into stereotypes, is the on-point writing. If you are a liberal arts type, you will rejoice: so little representation of the arts and those who believe in it, including enraged students who protest at the drop of a hat, on screen these days. Being too woke can be a thing, too.

The Underground Railroad, which is Barry Jenkins’s masterful re-working of Colson Whitehead’s novel of the same name, results in a harrowing tale of slavery in America in the 1800s. The story of Cora (the very expressive Thuso Mbedu), who escapes from her hellish life on the plantation — she is, literally, a cotton-pickin’ slave — full of beatings and constant intimidation, with the help of a network of sympathisers. Some of the sequences are terrifying: how do you watch a human being burnt alive? How? And some of the honeyed helpers to the cause of the slaves are as dangerous as the dogged slave catchers, hot on Cora’s trail. Essential viewing.

Many tomes can be written on just how class distinctions and hypocrisies are laid bare in this acerbic, acidic look at how the very wealthy chill, taking for granted their million-dollar frills. Mike White, whose previous ‘Enlightened’ has included satirical expositions of relationships, and corporate games, ratchets it up as high as it can go in ‘The White Lotus’. Hawaii can be a place of fun and frolic for those who can afford it; for some unfortunate others, the ones whose job it is to serve you with a smile, it can be the end of a life.

Would Steve Martin, he who has made a career out of playing jovial blokes, make a likely sleuth? He does, he does. He teams up with Martin Short and Selena Gomez, and they go about solving a murder in their Upper West Side building with a great deal of zest. ‘Only Murders In The Building’ comes into its own in two or three episodes, and then our trio, all laden with interesting backstories, are unstoppable. Great comic yarn, created by Martin and John Hoffman.

A small-town in Philadelphia. Gruesome murders. And Kate Winslet, who bites into her author-backed role as a cop who knows everyone in her town, divorced wife, mother, and grandmother, all rolled into one. Winslet in ‘Mare of Easttown’, is aces. And this series, created by Brad Inglesby, taut, telling, atmospheric, is one of the best shows of the year, hands down.

A music roundup of this year’s noteworthy female musicians