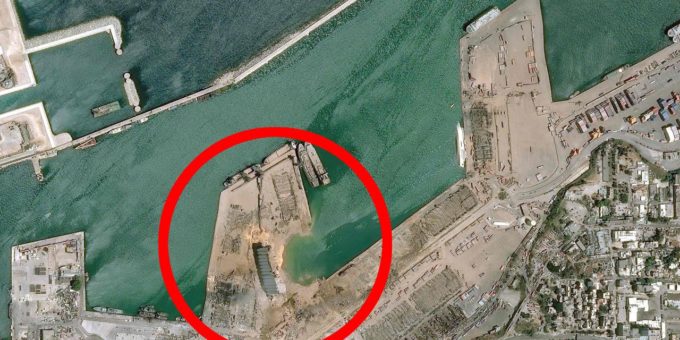 Shocking images have revealed the scale of the devastation in Beirut, Lebanon as first-hand video and accounts of the tragedy continue to emerge on social media.

On Wednesday a frantic search for survivors of the blast was underway, with footage of one man emerging from the rubble after 10 hours shared online.

Video shared on Twitter showed a woman playing a piano in the rubble of her apartment, while another showed a woman shielding young children as they watched the blast roll towards them, blowing out the windows of the apartment.

Before and after photos of the port show the area flattened after the explosion that was one fifth the size of the Hiroshima nuclear bomb and sent a huge mushroom cloud into the air.

RELATED: ‘Welding’ cause of deadly blast

Amateur photographer, Farouk Bakhour, 17 was ten minutes away from the port at McDonald’s with his friend and cousin when the explosion hit and was about to eat when the car started shaking.

“We heard a sound that was really, really loud and disturbing. We saw shattered glass all over the city. I looked up in the sky and I saw the big purple orange cloud after the explosion,” he told news.com.au.

“The windows of McDonald’s fell. Every single shop was blown out. People were shouting. There was blood all over everyone, it was really terrifying.”

Mr Bakhour said he was traumatised when he took his phone out and started filming the aftermath. He instantly started getting calls from his parents and family, but thought immediately the city had been hit by an air strike.

“It was really shocking and terrifying,” he said. “My heart skipped a beat. I was traumatised. My hands and legs started shaking. We’re heartbroken. Every single Lebanese loved Beirut like nobody does to any city. The destruction of Beirut, the hundred people dead, it’s traumatising.”

The blast killed more than 113 people including at least one Australian and wounded thousands more, leading to a two-week state of emergency to be declared in the area.

It’s estimated up to 300,000 people have been made homeless with between $3 billion and $5 billion worth of damage done in the city.

On Wednesday the Lebanese government said it wanted officials placed under house arrest over the blast that has been dubbed “apocalyptic”.

“We call on the military leadership to impose house arrest on all those who organised the storage of ammonium nitrate” at Beirut’s port, Information Minister Manal Abdel Samad said – referring to the substance that sparked the explosion.

Lebanese Prime Minister Hassan Diab said 2,750 metric tons of ammonium nitrate that had been stored for years in a Beirut portside warehouse had blown up.

The normally odourless substance has caused explosions before, including at a Texas fertiliser plant in 2013 that killed 15 and was ruled deliberate, and another at a chemical plant in Toulouse, France in 2001 that killed 31 people but was accidental.

When combined with fuel oils, ammonium nitrate creates a potent explosive widely used in the construction industry, but also by insurgent groups such as the Taliban for improvised explosives.

Security sources have reportedly said welding on the warehouse my have led the fertiliser to ignite, triggering the cataclysmic blast.

Tributes and offers of aid, rescue workers and food have flooded into the country since the blast, after an appeal from Lebanese leaders.

Australia has announced it will send $2 million in aid to the country while French President Emmanuel Macron will visit the country on Thursday.

Foreign Minister Marise Payne said an estimated 20,000 Australians are in Lebanon at any given time and the embassy there had suffered significant damage, but staff were unhurt.

“About 90-95 per cent of all of the windows at the front of the building are completely destroyed,” she said.

“There were glass injuries and other minor injuries as a result of that, but we thank heavens that those injuries were not more serious, although staff have, of course, received medical care.”

Britain’s Queen Elizabeth sent a message to say: “Prince Philip and I were deeply saddened by news of the explosion at the Port in Beirut yesterday.”

“Our thoughts and prayers are with the families and friends of those who have been injured or lost their lives, and all those whose homes and livelihoods have been affected,” she said.

The European Union (EU) said it would send rescuers, dogs and equipment to reach into the rubble for survivors.

“The EU Civil Protection Mechanism is now co-ordinating the urgent deployment of over a 100 highly trained firefighters, with vehicles, dogs and equipment, specialised in search and rescue in urban contexts,” the European commission for crisis management, Janez Lenarcic, said in a statement.

“They will work with the Lebanese authorities to save lives on the ground.”

Lenarcic said the Czech Republic, Greece and the Netherlands have already committed to the operation, while France, Germany and Poland were offering assistance. He called it “an immediate first step”.

“We stand with Lebanon and its people and are ready to mobilise further help,” he said.

United Nations child agency UNICEF’s representative in London, Yukie Mokuo said she was working with agencies on the ground to rehouse stored medicines and support affected children throughout the city.

“Yesterday’s catastrophe in Beirut adds to what has already been a terrible crisis for the people of Lebanon compounded by an economic collapse and a surge in COVID-19 cases. The pandemic already meant that hospitals are overwhelmed, and frontline workers are exhausted,” she said.

“UNICEF confirms its commitment towards the people of Lebanon, the authorities and all partners on the ground. We are on the ground and will do everything possible to provide much-needed assistance today and in the long run.”