Breaking News
2022-09-27 Kelley Flanagan and Peter Weber: Yup, They Really are Back Together! 2022-09-27 BWF World Rankings: HS Prannoy Storms Into Top 15 For First Time In Four Years 2022-09-27 Nick Jonas, Priyanka Chopra pack in PDA, look stellar for Global Citizen Festival appearance 2022-09-27 Watch: Viral Video Of Mexican Dosa Disapproved By The Internet; Heres Why 2022-09-27 Heart attack while working out: Can you exercise yourself to death? 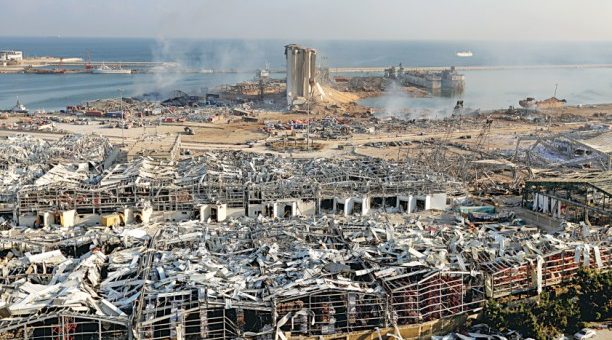 At least four Bangladeshis have been killed and around 100 others, including Bangladesh Navy officials, have been injured in a deadly warehouse explosion in Lebanon’s capital Beirut on Tuesday.

Bangladesh embassy in Lebanon’s Head of Chancery Abdullah Al Mamun confirmed this to The Daily Star at 8:00pm yesterday.

Two of the dead were identified as Mehedi Hasan from Brahmanbaria, and Mizan from Madaripur. Both of them were working as cleaners in an area close to the warehouse where the explosion took place.

Mamun said they had both been working in Lebanon legally for the last several years.

The other two were identified as Rezaul and Rasel Miah, both from Brahmanbaria.

The blast, which was possibly caused due to huge amounts of explosives being stored together, killed around 100 people and injured around 4,000.

The tragedy struck while the country is still suffering from months of political and economic crises and a global pandemic.

Of the injured Bangladeshis, 21 are from Bangladesh Navy ship “Bijoy”, which was deployed under peacekeeping mission United Nations Interim Force in Lebanon (UNIFIL) Maritime Task Force.

One Navy official was injured severely in the explosion, said a press release by Inter Services Public Relations Directorate (ISPR).

All the injured navy officials were undergoing treatment at the American University of Beirut Medical Centre, while others were taken to Hamoud Hospital by air ambulance following primary treatment under the supervision of UNIFIL. They are currently out of danger, said the ISPR.

The Bangladesh Navy warship “Bijoy”, which had been participating in UN Peacekeeping Missions since 2010, remains deployed in the Mediterranean as a member of Multinational Maritime Taskforce to establish peace.

The ISPR said the ship works to prevent illegal arms and ammunition from entering Lebanese land, monitors suspicious ships and aircrafts, rescues ships in trouble and provides training to the Lebanese Navy.

“Within half an hour, we rushed to the ship. We are looking after them [the injured officials] and the other Bangladeshis,” said Abdullah Al Mamun.

He said the embassy has information that about 10 Bangladeshi migrants were under treatment at two hospitals and that most others were given primary treatment and released. All of those injured did not need hospitalisation, he said.

“We are asking all to contact us if they need medical assistance,” Mamun said.

Babu Saha, a Bangladeshi working in Lebanon for over a decade, said the explosion has rocked the already vulnerable migrants in Lebanon, home to some 160,000 Bangladeshis.

Many Bangladeshis there have been facing joblessness because of months of political unrest and economic downturn. Those with jobs were facing troubles due to the high prices of dollars, which has raised the living cost, while their savings have gone down.

“Meanwhile, the coronavirus pandemic has forced most of the Bangladeshis to remain indoors,” he told this correspondent by phone yesterday.

With the situation worsening due to the explosion, the migrants are feeling that it would be difficult for them to stay, he added.

Another migrant Rana Ahmed said he lives around 10km away from the explosion site.

“So many people, including Bangladeshis, were injured. It’s a very difficult time here for all of us. We have been trying to go home for many months, but failed because of flight suspension. I would request the Bangladesh government to arrange flights for us at the soonest,” he said.

Meanwhile, Lebanese rescue workers dug through the mangled wreckage of the buildings yesterday, looking for survivors after the massive warehouse explosion sent a devastating blast wave across Beirut.

Officials said the toll was expected to rise after the blast at port warehouses that stored highly explosive material. Officials estimated that up to 300,000 Beirut residents will be left homeless.  The blast was the most powerful ever to rip through Beirut, a city still scarred by civil war three decades ago.

It sent a mushroom cloud into the sky and rattled windows on the Mediterranean island of Cyprus, about 100 miles (160 km) away.

President Michel Aoun said 2,750 tonnes of ammonium nitrate, used in fertilisers and bombs, had been stored for six years at the port without safety measures.  He told the nation the government was “determined to investigate and expose what happened as soon as possible, to hold the responsible and the negligent accountable, and to sanction them with the most severe punishment.”

An official source familiar with preliminary investigations blamed the incident on “inaction and negligence”, saying nothing was done by committees and judges to order the removal of hazardous material.