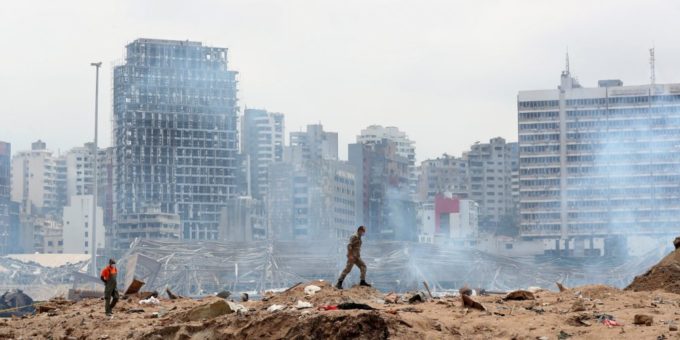 PARIS: With some 300,000 people left homeless by the massive explosion in Beirut, and fears of food and medicine shortages, MSF on Thursday likened the humanitarian fallout to that of Lebanon’s civil war.
Doctors Without Borders (MSF) President Mego Terzian said that after the initial rush to treat the injured, the next priority would be to provide food and shelter for the destitute.
“Another priority will be taking care of people with chronic illnesses, those with cancer, HIV or respiratory diseases such as asthma, given the risk of an interruption of drug supplies,” he said.
Terzian said warehouses storing medicines and vaccines in the port of Beirut were damaged in Tuesday’s monster blast.
The provisional death toll stood at 137, but with dozens missing and 5,000 wounded the number of victims was expected to rise as rescue workers continued to comb through the rubble.
Three hospitals in the Achrafieh neighborhood of central Beirut, including one with 1,100 beds, were damaged in the blast.
“The dialysis center, which was the biggest in the country, was completely destroyed,” Terzian said.
But hospitals that were quickly overrun on Tuesday, with overflowing emergency rooms, had a handle on the situation by Wednesday with many injured transferred outside Beirut, he added.
“Lebanese health care workers, especially those with experience of the civil war, were able to triage the emergency rooms very quickly and prioritize those patients who had to go to the operating rooms,” he said.
Terzian said Qatar, Kuwait and Jordan were sending field hospitals, and attempts were being made to guarantee supplies of basic medicines such as antibiotics, painkillers and blood bags.
The blast sowed destruction like that caused by the country’s 1975-90 civil war, leveling buildings several hundred meters away.
“We lived difficult and similar experiences during the Lebanese war,” Terzian said.
Bombings of petrol warehouses near the port had yielded “similar scenes — the city was completely devastated, people were wandering the streets, wounded, desperate, without knowing where to go.”
Lebanon’s diaspora, estimated at nearly three times the size of the country’s population of 5 million, has stepped up to provide assistance.
Lebanese expats rushed to wire money to loved ones who lost their homes or were injured in the blast, while others worked to create special funds to address the tragedy.
“I’ve been on the phone all morning with … our partners in order to put together an alliance for an emergency fund in light of the explosion,” said George Akiki, co-founder and CEO of LebNet, a nonprofit based in California’s Silicon Valley that helps Lebanese professionals in the United States and Canada.
“Everyone, both Lebanese and non-Lebanese, wants to help.”
Akiki said his group, along with other organizations such as SEAL and Life Lebanon, have set up Beirut Emergency Fund 2020, which will raise much-needed money and channel it to safe and reputable organizations in Lebanon.

Many Lebanese expats, who almost all have loved ones or friends impacted by the disaster, are also helping individually or have started online fundraisers.
“As a first step, my wife Hala and I will match at least $10,000 in donations and later on we will provide more help toward rebuilding and other projects,” said Habib Haddad, a tech entrepreneur and member of LebNet based in Boston, Massachusetts.
He said many fellow compatriots are doing the same, channeling their grief and anger toward helping their stricken homeland, which before the blast was already reeling from a deep economic and political crisis that has left more than half the population living in poverty.
“They’re asking Lebanese emigrants around the world to try and help,” said Maroun Daccache, owner of a Lebanese restaurant in Sao Paulo, Brazil, a country that has an estimated 7 million people of Lebanese descent.
“I’m trying to help with something but here the business is not very good because of the pandemic. Still, we are much better off than those over there,” Daccache said.
Even before the tragedy, Lebanon heavily relied on its diaspora for cash remittances but these inflows had slowed in the last year given the country’s political crisis.
Expats also usually visit home every summer, injecting much-needed cash into the economy. But the diaspora this year has largely been absent because of the COVID-19 pandemic and many had become increasingly skeptical and reluctant to send aid to a country where corruption is widespread and permeates all levels of society.
“People are outraged by the mismanagement of the country and they want to help, but no one trusts the people in charge,” said Najib Khoury-Haddad, a tech entrepreneur in the San Francisco area, echoing the feeling of many Lebanese leery of giving money to a dysfunctional government.
“I heard that the government has set up a relief fund but who would trust them?” he added.
Ghislaine Khairalla, 55, of Washington DC, said one idea being floated was to pair a needy family in Beirut with one outside the country that could provide a safe and direct source of assistance.
“We (the diaspora) are the financial bloodline especially since the economy is not going to recover anytime soon,” Khairalla, whose brother’s home was reduced to rubble by the blast, said. “And we are lucky to have a kind of stable life here. We are physically outside Lebanon but our hearts and emotions are there.”
Nayla Habib, a Lebanese-Canadian who lives in Montreal, said she planned to help in whatever way she can and expressed outrage at reports that the blast was caused by more than 2,700 tons of ammonium nitrate stored at the Beirut port, which is located in the heart of the densely populated city.
“The state of our country is terrible and heartbreaking,” said Habib.
“I donated before the blast to a lady that helps feed the poor and I will donate again.
“Whatever I give is like a drop in the ocean but it’s necessary,” she added.
“I live in Canada but part of my heart is still there.”

Rana Daggubati-Miheeka Bajaj wedding: Everything we know so far