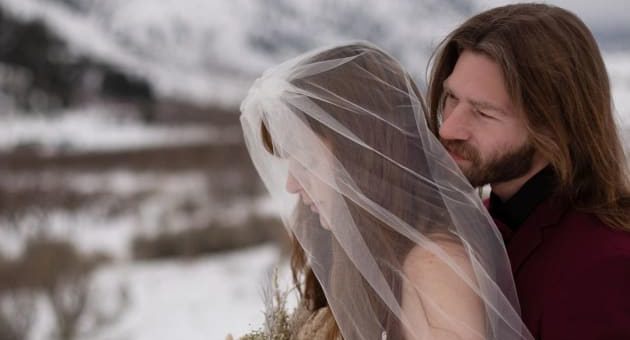 
The Alaskan Bush People star and his new bride have had major ups and downs during their troubled relationship.


Their latest reconciliation was in August of 2021.


Now, they are all smiles as they celebrate their nuptials with loved ones.


“The #AlaskanBushPeople couple and parents to 1-year-old River tied the knot yesterday,” the caption detailed, “in an intimate ceremony.”


Bear spoke to Discovery about the nuptials and this major relationship milestone.


“it feels really good to be a married man,” he gushed.


“ … I’ve loved Raiven a long time,” Bear acknowledged, “and it’s a honor and a privilege to finally call her my wife.”


“She is the most beautiful woman I’ve ever seen,” Bear raved.


“And,” he said of his wife, Raiven “still takes my breath away!”


Raiven expressed that she was “so very happy to have our friends and family that were able to make it.”


“And,” she continued, “I’m very grateful for the family we’ve made.”


They are parents to one-year-old River, who will actually turn two in early March.


Bear’s mother, Ami Brown, was of course present for the ceremony.


So were his brothers Noah, Bam Bam, and Gabe.


His sisters, Rain and Bird, were also there for the wedding to cheer on their brother and their new sister-in-law.


There were a couple of very conspicuous absences, judging from what we know of the nuptials.


Family patriarch Billy Brown passed away nearly one year ago.


Ami is a widow, and he is dearly missed by the family.


There was also no sign of Matt Brown, though he is still living.


Matt has been estranged from at least parts of his family for some time, due to major conflicts with his parents.


He has struggled with addiction, and — not unfairly — takes issue with some of what it has been like being a reality TV familly.


“I only wish Da had of been there,” Bear reflected with a hint of mourning.


“But,” he continued, “I know he was watching from the best seat.”


Bear is of course referring to his belief that his father observed the nuptials from beyond the grave.


“I look forward to building a life, a family, and a home with Raiven,” Bear declared.


“And my heart belongs to her,” Bear concluded, “and her alone.”


Bear and Raiven began dating a few years ago and were in a relationship for months before going public.


However, upon going public, things worsened in their relationship — especially when Bear’s thirsty fans got involved.


They were convinced that no one was good enough for Bear, and that took its toll — among other things — on their romance.


Raiven and Bear split up, but Raiven almost immediately discovered that she was pregnant.


She and Bear went from dating to engaged to broken up to expectant parents in a relatively short time.


Eventually, their plans to co-parent together as friends turned into a reconciliation.


It was just the first breakup and reconciliation of many, however, and it continued after River was born.


Raiven at one point obtained a restraining order to protect her from Bear, describing alarming and menacing behavior.


Their breakups and reconciliations continued through last summer, reuniting in August three months after another split.


That does not sound like a recipe for stability, particularly in light of Bear’s behavior.


(While Raiven’s descriptions of him are allegations, Bear did make a fool of himself on social media in a very public, not-so-alleged way)


We suppose that we can close our eyes and wish that everything will be happy and perfect for them now that they’re married.

I faced a lot of criticism for my appearance, for the way I look – Dhanush