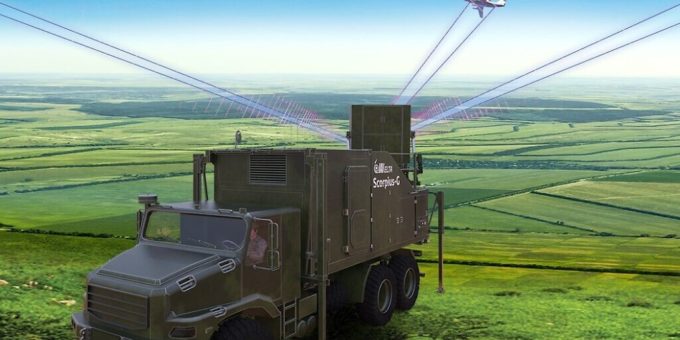 Defense contractor Israel Aerospace Industries unveiled a new electronic warfare system Thursday, touting it as the first ever that can target multiple threats simultaneously, including at varying distances.

The system, dubbed Scorpius, can disrupt the communications and radar systems of UAVs, ships, missiles and more, according to IAI.

Scorpius scans the entire sky and can direct narrowly targeted beams “at any wavelength, any frequency, any direction against specific targets without interfering with anybody else,” IAI’s Gideon Fustick told Forbes. “We believe this is the revolution. It’s the future of electronic warfare,” Fustick said.

“Scorpius’ technological breakthrough is characterized by unprecedented receiver sensitivity and transmission power (ERP), far exceeding those of legacy EW systems. This allows Scorpius to detect multiple threats, of different kinds, simultaneously, from dramatically increased distances, and to address each threat with a customized response,” IAI said in a statement.

The new Scorpius system can be attached to ground, naval and air forces, according to the semi state-owned IAI.

An IAI official said the new technologies “tip the scale of electronic warfare.”

“The modern battlefield depends on the electromagnetic domain for sensing, communications, and navigation. Protecting the use of the electromagnetic domain for our forces, while denying its use by the enemy, have become mission-critical for success in combat and for ensuring the superiority of our forces in the field,” said Adi Dulberg, general manager of IAI’s Intelligence Division, in a statement.

Since 1953, the company has provided technology solutions to government and commercial customers worldwide, including satellites, UAVs, missiles, weapon systems and munitions, unmanned and robotic systems, and radar. The firm is one of Israel’s largest technology employers with offices and R&D centers in Israel and around the world. Founded by the state, it has undergone privatization but the state retains a majority stake in the firm.

In Streetwise Hebrew for the Times of Israel Community, each month we learn several colloquial Hebrew phrases around a common theme. These are bite-size audio Hebrew classes that we think you’ll really enjoy.

This month, we’re learning phrases on the topic of strength and power. Ready to get tough with us?


You’re serious. We appreciate that!


We’re really pleased that you’ve read X Times of Israel articles in the past month.

That’s why we come to work every day – to provide discerning readers like you with must-read coverage of Israel and the Jewish world.

So now we have a request. Unlike other news outlets, we haven’t put up a paywall. But as the journalism we do is costly, we invite readers for whom The Times of Israel has become important to help support our work by joining The Times of Israel Community.

For as little as $6 a month you can help support our quality journalism while enjoying The Times of Israel AD-FREE, as well as accessing exclusive content available only to Times of Israel Community members.

“When Covid emerged, no country was prepared. At this time Yoga became a source of inner strength”
2021-06-21

Muslim countries should stand up to Islamophobia: PM Khan
2021-02-09

Nagori Halwa : A Classic Breakfast Combination Served In The Streets Of Old Delhi (Recipe Inside)
2021-05-17