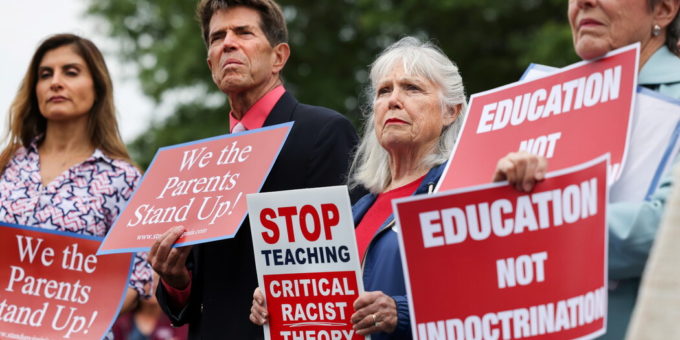 Governments and school boards have wide leeway in setting curriculums in K-12 public schools, where courts have generally held that teachers do not have the same degree of academic freedom as those in universities. But many of these bills, PEN argues, are written so vaguely that they may chill a broad range of speech.

“This over-breadth and ambiguity is why they are so alarming,” Jonathan Friedman, PEN’s director of free of expression and education, said. “The truth is, most administrators and general counsels will quickly say, ‘let’s not run afoul of this.’”

Erwin Chemerinsky, a First Amendment expert and the dean of the law school at the University of California, Berkeley, who previewed the report, agreed. “Whenever the government regulates speech, it has to be clear about what’s prohibited and what’s allowed,” he said. “These laws are so vague in their wording that a teacher can’t tell.”

According to PEN, nine bills specifically target critical race theory. Eleven bills explicitly ban lessons based on the 1619 Project, an initiative by The New York Times Magazine exploring the history and continuing legacy of slavery that has been adapted into a classroom curriculum.

So far, by PEN’s count, 11 bills have become law, in nine states, sometimes within days of being introduced. Another 18 are pending from the 2021 legislative session, and six more have already been drafted for consideration for 2022.

Many of the bills, according to PEN, include language that purports to affirm freedom of speech and thought. Ten bills prohibit schools or teachers from “compelling” a person to affirm belief in a “divisive concept,” while eight mandate “balanced” teaching of “controversial” topics. (In Texas, such a law recently led one school official last month to suggest that educators who teach the Holocaust should make sure to have books that offer “opposing” views.)