Breaking News
2021-07-27 Abdul Razzaq Opened Up About His Relationship With Stage Dancer Deedar 2021-07-27 The Second Annual, Official WordPress.com Growth Summit is Coming and You Won’t Want to Miss It – The WordPress.com Blog 2021-07-27 Grassy Narrows to get $68.9M more from Ottawa for centre to care for people with mercury poisoning 2021-07-26 Dhoop ki dewar: A message of peace between India and Pakistan 2021-07-26 West Bengal Chief Minister Mamata Banerjee Lands In Delhi PM Modi, 3 Congress Leaders Day 1 Agenda 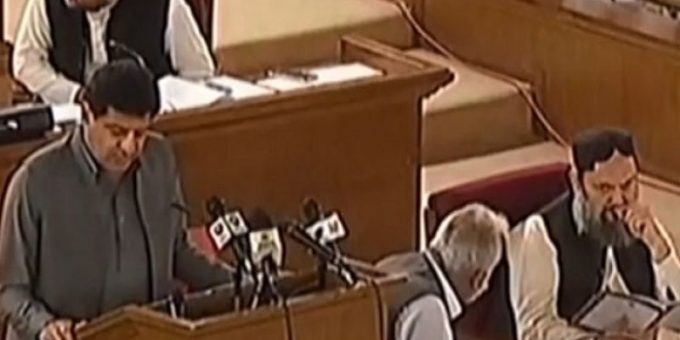 The Balochistan government has unveiled its budget worth Rs584 billion for the fiscal year 2021-22 with a total development outlay of Rs237 billion without imposing a new tax.

The budget session of the Balochistan Assembly has commenced under the chair of Speaker Abdul Quddus Bizenjo amid the protest of the opposition lawmakers outside the assembly’s building.

During his speech, Balochistan Finance Minister Zahoor Ahmed Buledi said that the government is presenting a balanced budget for the new fiscal year.

It has been suggested to allocate Rs3.6 billion in the new budget to combat coronavirus pandemic, whereas, the province aims to vaccinate all citizens. Rs500 million will be spent for the expansion of the children hospital, he added.

The government announced to end slip system from all state-administered hospitals across the province, whereas, emergency centres are being established alongside roads. Rs5.5 billion is allocated for the health insurance card program by the provincial government.

More than Rs76 billion has been allocated for the initiation of 2,086 new schemes, announced Buledi.

“Rs200 million is allocated for the construction of two new hostels in Bolan Medical College; more than 200 government schools will be upgraded; Rs112 billion for ongoing development schemes while the budgeted development outlay is Rs189.19 billion for the new fiscal year.”

The government employees will get a salary raise up to 10 per cent, announced the finance minister.

In a bid to stop the provincial finance minister from presenting the budget, opposition’s lawmakers held a sit-in outside the Balochistan Assembly.

Women legislators belonging to the opposition parties staged a sit-in outside the provincial assembly and refused to give way despite many requests by the administration.

The atmosphere turned tense after the opposition’s lawyers stopped the assistant commissioner from entering the provincial assembly.

Clashes erupted between the police and the opposition lawmaker when Balochistan Chief Minister Jam Kamal Khan arrived at the assembly. The opposition MPA’s were of the view that they will not let the budget session to be held.

Meanwhile, the opposition lawmakers locked all four gates of the provincial assembly to prevent the budget session from taking place.

However, the chief minister and few other ministers managed to enter the assembly. MPA Abdul Wahid Siddique injured during the clashes with police and was shifted to the hospital, said sources.

The Second Annual, Official WordPress.com Growth Summit is Coming and You Won’t Want to Miss It – The WordPress.com Blog
2021-07-27

Grassy Narrows to get $68.9M more from Ottawa for centre to care for people with mercury poisoning
2021-07-27