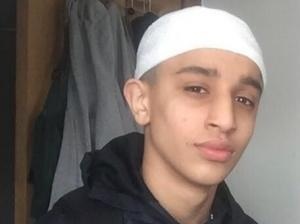 The chaos happened on April 22 and Hashim Sajjad, 20, of Wheatlands Crescent in Daisy Hill, has been on trial, accused of the murder of Muhammed, for the past eight days.

The 20-year-old admitted stabbing Muhammed, with CCTV played during the course of the trial showing that very moment, but denied murder, and Sajjad was found not guilty on that count, and on manslaughter, by a jury this morning.

His case was that he acted in self-defence when, he told the court, Muhammed came towards him, face covered, with a machete and another weapon in his other hand.

Despite being stabbed on Duckworth Lane just before midnight, outside Garam Chai (a teahouse), Muhammed ended up at Bradford Royal Infirmary (BRI) – five minutes away – still alive, without the help of an ambulance.

There were rumours at the time that Muhammed had somehow managed to walk to the hospital, even with his eventual fatal wound.

But CCTV shown in court and evidence from forensic pathologist, Dr Christopher Johnson, explained exactly what happened to the 19-year-old following the stabbing.

Muhammed suffered a stab wound that was 2cm in width/length and 9cm in depth.

It had an upwards trajectory into the right, lower chest of his body and passed into the musculature of the upper abdominal wall.

Dr Johnson said: “The blade cut through the cartilaginous part of the right sixth and seventh ribs and entered the chest cavity to penetrate the pericardium – the pericardium being the fibrous sack that surrounds the heart.”

The knife then punctured the main pump of the heart (right ventricle) before going through the interlobular septum, to emerge into the left side of the heart.

Internally, blood would have come out of the heart and into the pericardium. This would cause a pericardial tamponade. The issue here is the sack around the heart is fibrous, meaning it can’t expand and therefore the blood puts pressure on the heart – a major threat to life.

Blood from the heart and pericardium also leaked into the chest cavity.

Dr Johnson said this sort of injury would not lead to death immediately and that activity from the victim might have been possible for a short number of seconds or minutes.

So, did Muhammed manage to stumble his way to BRI, before ultimately dying?

Well, the CCTV shows him collapse to the ground, clutching his chest – something Dr Johnson said he would expect to happen initially.

But he then gets to his feet, stumbles forward a few yards, before collapsing to the ground again.

Further CCTV then shows a man – believed to be Arbas Khan, a worker at the tearoom who was not involved in the fracas and was already at the scene – scooping Muhammed up and putting him into a different white Volkswagen Golf to which he first arrived.

The Golf then drove off from Duckworth Lane and Muhammed is – in the words of Mr Charles Miskin QC for the defence – “simply left”, as the car moves off and meets up with other vehicles (the remaining white Volkswagen Golf and the grey Audi that leaves Duckworth Lane as the serious attack begins) at a gated industrial estate, Lessarna Court.

Muhammed was still at this point making respiratory efforts of very shallow breathing at the hospital, according to Dr Johnson.

But the forensic pathologist said the bleeding injury to the heart ultimately compromises the cardiac function eventually and Muhammed was pronounced dead at 12.50am on April 23, after cardiac arrest.

Cineplex wins $1.24B in damages in lawsuit with former merger partner Cineworld