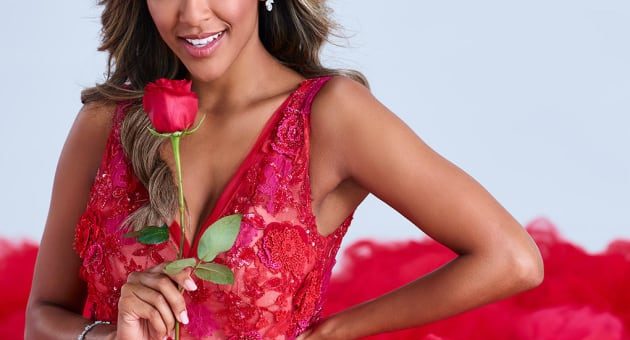 
After months of rumors and speculation, Tayshia Adams finally stepped out of a limo and claimed her place as Bachelorette.


In what might have been the show’s most eventful episode of all time, Clare Crawley got engaged to Dale Moss, and we learmed that the guys who were left behind will now compete for Tayshia’s affection.


And you know what that means — a whole new round of Bachelorette spoilers!


Perhaps it’s because of all the coronavirus-related delays. but Bach insiders were unable to keep their secrets to themselves this year, and as always, spoiler master Reality Steve was there to gather up all the intel.


So scroll on to find out who gets Tayshia’s final rose — and which contestant goes home under mysterious circumstances!


[UPDATE: We have new information about how and when Tayshia and her new man hit it off! Scroll on for details!]

In case you missed it, Clare’s final episode of The Bachelorette aired on November 5. Her tenure may have been brief — and VERY dramatic — but it had a happy ending.

3.
Skipping to the Good Part

Clare revealed to Chris Harrison that she was in love with Dale Moss, and by the end of the episode, she and Dale were engaged.

4.
This Is What the Show Is All About!

That’s wonderful, of course, and we wish Clare and Dale all the best.

But the situation left 16 guys in a lurch. After quarantining and enduring weeks of Covid tests, it now looked as though they had made the trip to SoCal for no reason.

Host Chris Harrison offered the men a choice — head home, or stick around and see what’s behind door number two. All of them chose to remain.

That’s when Tayshia made her grand entrance. And while we didn’t get to see the nervous gentlemen react to her yet, you can bet they’ll be pretty pleased with what they see.

For months now, the talk has been all about Clare and her mysterious exit. Now that she’s handed out her final rose, the Tayshia spoilers are coming in hot!

As usual, the clairvoyant Reality Steve perfectly predicted the time on transition. “I originally reported in the season spoilers that Clare had 3 rose ceremonies,” he wrote in a recent blog post. “Clare does NOT have a 3rd rose ceremony. Next week is when the transition is made from Clare to Tayshia.”

It seems that from here on out, we’re in for a much more conventional season of The Bachelorette, complete with rose ceremonies and actual dates! Although that doesn’t mean there are no twists …

11.
The End of Tayshia’s Journey

We already know just about everything there is to know about Tayshia’s final episodes, so if you want to be surprised when they air, this is your last chance to bail out!

Let’s start with her final four — and the news of one guy who goes home without being eliminated.

First up is Ivan, a literal rocket scientist from Dallas. He kept a pretty low profile during Clare’s tenure, but it seems he caught Tayshia’s eye right off the bat.

Next is Ben Smith, an Army Ranger turned fitness guru who currently resides in Venice Beach.

Next up is Zac Clark, a guy with a very interesting story. After struggling with substance abuse issues, this marathon runner got sober and became an addiction counselor. More on Zac later.

And finally, we have Brendan Morais. Brendan, it seems, is that rare Bachelorette contestant who took himself out of the running.

Brendan got divorced not long before he auditioned for The Bachelorette. It seems he ultimately decided he just wasn’t ready for another serious relationship so soon.

“Brendan Morais leaves the show on his own. His family was the only one that didn’t show up for hometown dates,” Reality Steve wrote of the model and actor. “As I reported a few weeks ago, Brendan’s divorce was finalized just over a year ago, and apparently that played a big role in why he left. Guess he just wasn’t ready to jump into another relationship.”

According to Steve, Tayshia’s final rose goes to 36-year-old Zac. But it doesn’t look like these two will be headed for the altar anytime soon.

For reasons that aren’t entirely clear, Zac and Tayshia did not get engaged while filming her season finale.

So it looks like this season does hold some secrets, after all …

22.
Running Out of Steam

Was Tayshia the one to hit the brakes? Was it marathon man Zac? We guess we’ll have to watch to find out.

It’s important to note that there’s no reason to believe that Tayshia and Zac broke up, they’re just not engaged.

24.
Hoping For a Happy Ending

So we guess there’s still a chance that this could be the first season to yield not one but TWO happy marriages!

In the meantime, we’re just looking forward to seeing Tayshia reign supreme as the Queen of Roses!

So we’ve heard a lot about Zac, but thus far we have yet to see him really hit it off with Tayshia. But that will all change very soon.

At this point, fans who haven’t encountered any spoilers seem to think that Ivan is the frontrunner. Those expectations are about to be upended …

According to Reality Steve, on the episode that’s set to air Tuesday, December 1, Zac and Tayshia enjoy an intimate one-on-one date, and they delve into some deeply personal matters.

“Zac opens up about his previous marriage and battle with addiction. Tells his sobriety story, how bad it got, and how it’s changed him today. Tayshia gives him the rose,” Steve writes.

Of course, that’s not the end of the episode. From there, Tayshia invites ten men on a group date, where they paint nude models. Ben Smith makes quite an impression and wins the group date rose. Watch your back, Zac!

Obviously, we’ve got a lot of season ahead of us, and Zac’s road to Tayshia’s heart won’t be an easy one. But if we’ve learned one thing over the years, it’s to never doubt Reality Steve!

Neeraj Pandey reveals that the team of Chanakya starring Ajay Devgn is prepping for the film virtually : Bollywood News
2020-03-30