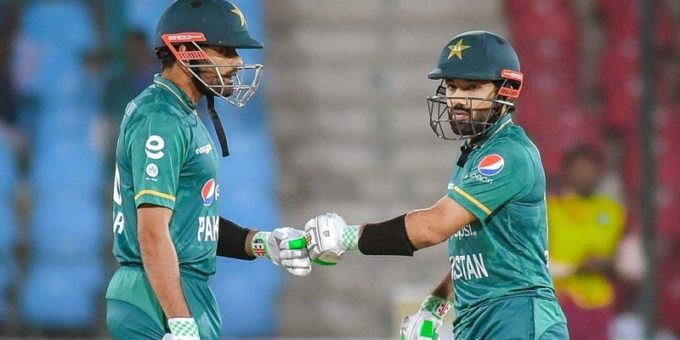 Chasing a mammoth 207-run target, the duo proved too good
against West Indies bowlers as the home side comfortably went over the line
with seven wickets in hand.

They provided a 158-run opening stand to set the tone of the
run-chase.  Pakistan suffered the first
blow in the shape of Babar’s wicket, when the hosts were 50 runs away from victory.

The Pakistan captain ended his year with a brilliant 79-run
knock off 53 bowls which includes nine boundaries and two maximums.

On the other hand, Mohammad Rizwan signed off the year in
style with 87-run knock at the National Stadium Karachi. He ended the year as
the highest runs getter in the shortest format of the game.

The wicketkeeper struck 10 boundaries and three maximums in
his 45-ball innings.

Fakhar Zaman (12), Asif Ali (21) and Iftikhar Ahmed (one) finished
the proceedings for Pakistan.

Romario Shepherd, Dominic Drakes and Odean Smith shared a
wicket each for the losing side.

Earlier, West Indies skipper Nicholas Pooran struck a
rapid-fire half century to lead his team to 207-3 in the final T20I against
Pakistan in Karachi on Thursday.

Pooran hit a career-best 37-ball 64 with six sixes and two
boundaries after the West Indies won the toss and opted to bat at National
Stadium.

The match was given the go-ahead after some uncertainty
after five members — including three players — of the West Indies squad
tested positive on Thursday.

That took the squad’s tally to nine positive cases —
including six cricketers — after three players and a staff member tested
positive on Saturday.

Pooran added 93 for the third wicket with Darren Bravo, who
scored an unbeaten 27-ball 34.

Pakistan under the pump!

Dahani claims his first wicket of the match!

Shamarh Brooks departs one short of his fifty ❌

On Camera, Snatchers Drag Woman 150 Metres On Scooty In Delhi

10 weather stories that made 2021 a year like no other

Banned organisation will now be treated as a militant group, will not be allowed to challenge state’s writ: Fawad
2021-10-28