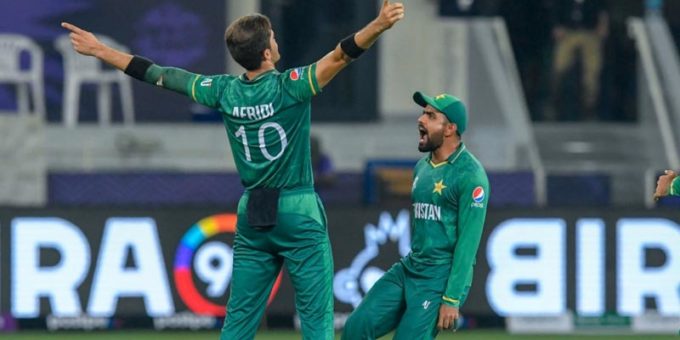 Pakistan all-format Babar Azam and pacer Shaheen Shah Afridi are optimistic to carrying forward their impressive form in 2022 after bagging the ICC ODI Cricketer of the Year and the ICC Player of the Year awards.

The pacer had a great year with the bowl, where he bagged 78
wickets in 36 games, while, Babar Azam, who was named captain of the ICC’s ODI
and T20I sides, was instrumental with the bat in ODIs.

The Pakistan captain thanked fans, the team, PCB and parents
for their support in a message released by the International Cricket Council. “It
was not possible without them. I feel proud to have such a good team.”

The prolific batter also revealed his favourite knock of
2021.  “The best innings, if you ask me
is that 158, I scored against England, which is also my highest score,” he
said. “I reckon it is the best innings of my career.”

Moreover, commenting on other remarkable achievements, the
batter said that beating South Africa on their home turf was a difficult task.
“We won the series there on the back of performances by Fakhar Zaman, myself
and Imam-ul-Haq.”

On the other hand, Shaheen vows to continue his impressive
run in 2022. “I always try to produce good performances for Pakistan and I will
continue my efforts.”

“There is a lot of support for others in our team,” he said.
“We are gelled together and feel happy when we see our teammates doing well. I
had many good performances including five-fors in Tests.”

“But the most memorable one for me would be the match we won against India,” he added. “It was a great year for me and hopefully you will see good performances in 2022 too.”

Admire Congress But Had A Bad Experience

Immunity-Boosting Diet: Bajra Til Ki Tikki In Winters To Ward Off Cold And Cough
2020-11-16