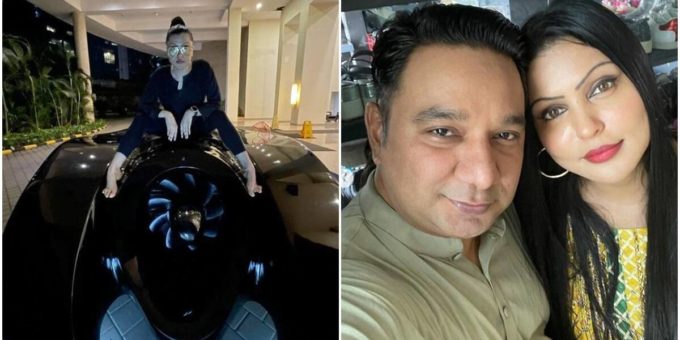 Choreographer-filmmaker Ahmed Khan surprised his wife Shaira Ahmed Khan with a limited edition Batmobile car on her birthday. The car is based on the design of the Batmobile used in the 1989 Batman film starring Michael Keaton.

The happy wife took to Instagram to share a video of the mean machine along with a few pictures. Shaira is seen posing with the parked car outside their home. She captioned the post, “Thanku love @khan_ahmedasas for this dream come true … #Ourdreamcar #keatonmobile1989 #batmobile @____azaan____ @_subhaankhan_ #keepingupwiththekhans.”

As per reports, the car took eight months to arrive from the US and was assembled in Mumbai. While Shaira’s car is winning over the internet, she isn’t the first one to own a Batmobile.

According to a Pune Mirror report, Adar Poonawalla refurnished his Mercedes S350 into a Batmobile. Adar hired the same Mumbai-based company as Ahmed, Executive ModCar Trendz (EMT), and paid them Rs 40 lakh to add the wings and extended boot. The businessman reportedly gifted the luxurious car to his son Cyrus Jr.

On the work front, Ahmed Khan’s last release Baaghi 3 released in cinema halls in March last year. However, owing to the pandemic-led lockdown, the Tiger Shroff-Shraddha Kapoor actioner only had a short run of two weeks at the box office.

The F.T.C. plans to crack down on mergers of gas-station companies.

India Shot Down a Satellite, Modi Says, Shifting Balance of Power in Asia
2019-03-27