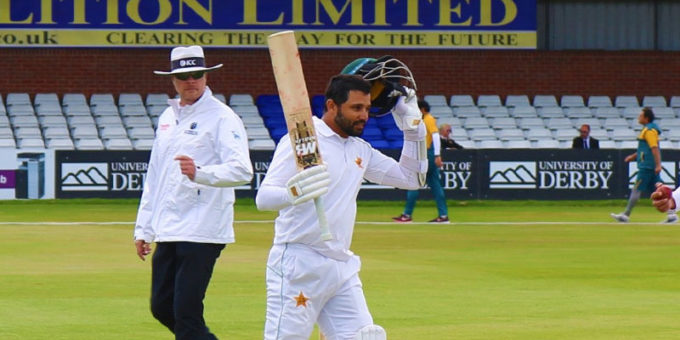 The batting trio of Azhar Ali, Fakhar Zaman and Asad Shafiq helped PCB Green to a six-wicket victory against PCB White in their intra-squad match in Derby.

PCB White started the fourth day’s proceedings on their overnight score of 245-5 and declared their second innings not too long after with the score at 285-5 and a lead of 351 runs.

Mohammad Rizwan was the standout performer with the bat for Babar Azam’s side. He made 100 with the help of 14 boundaries and stitched a 109-run partnership with Shadab Khan (62) for the sixth wicket.

Team Green, chasing a target of 352 runs, suffered an early blow with Mohammad Hafeez getting dismissed in the first over. The side recovered with skipper Azhar Ali and opener Fakhar Zaman getting together with their 159-run partnership for the second-wicket.

Fakhar narrowly missed out on his century when he was dismissed on 99.

The side were further bolstered by Azhar and Asad’s 129-run partnership for the third wicket. The skipper led from the front with his 120-run knock before retiring whereas Asad also retired after chipping in with 67.

Muhammad Musa and Shaheen Shah Afridi took a wicket each for Babar Azam’s side.

The second four-day intra-squad match will be played on July 24 at the same venue.