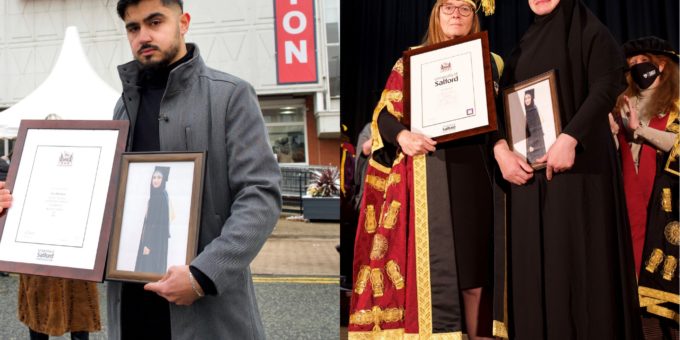 THE family of a murdered law student have collected her degree on the day she was due to graduate from university.

On what should have been an occasion for celebration, Aya Hachem’s family were forced to put on a brave face as they attended Salford University to collect the 19-year-old’s law degree on her behalf.

Aya, who had aspirations to become a solicitor, was shot dead on King Street in Blackburn in May of last year, when she was two years into her course.

Speaking after the event, Dr Janice Allan, Dean of the Business School said: “Aya was a bright and promising student with ambitions to become a solicitor.

“She was driven not by personal ambition but from a desire to help others and to speak for those who do not have a voice themselves. Aya touched the lives of many and, through her volunteering, contributed so much.

“Her tragic and senseless death devastated everyone who knew her, including our staff and student community. We were honoured to be able to present a posthumous award to Aya’s family at today’s ceremony and to share our memories of an outstanding student and humanitarian.”

The ceremony was attended by Samar, Aya’s mum, and her brother Ibrahim.

Seven men were found guilty of murdering Aya in a botched drive-by shooting following a three-month long trial over the summer. They were also found guilty of the attempted murder of their intended target Pachah Khan.

Between then the men will serve more than 200 years after being handed lengthily sentences by the Honourable Mr Justice Mark Turner.

An eight defendant, a woman, was found guilty of manslaughter and will spend the next 15 years behind bars.

Speaking to the Lancashire Telegraph earlier this year, Ibrahim said: “Aya to us wasn’t just a normal person, she was an angel in all aspects. She was caring and so pure. She had a lot of dreams and she supported us. She was the younger sister but she was the one who supported me more than I supported her.

“I have never seen a human who was so pure. She made us believe she was an angel and that’s not just because she was my sister.”

Hundreds died during B.C.’s heat dome. Who is responsible for deaths caused by extreme heat?
2021-07-08