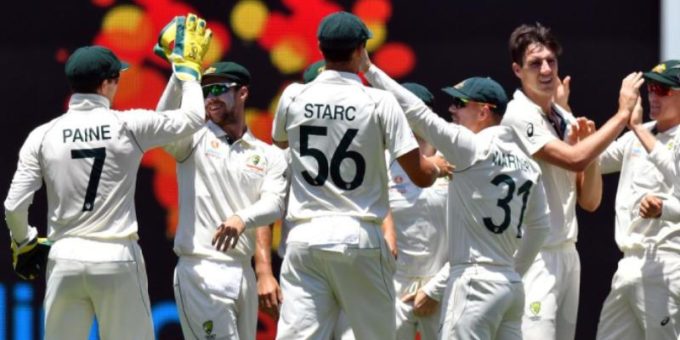 Australia Thursday named an unchanged team for the day-night second Test against Pakistan after trouncing them in Brisbane, but took a risk by releasing concussion substitute Cameron Bancroft.

The home side easily won the first Test by an innings and five runs inside four days, but selectors resisted the urge to rest one of their strike bowlers or add a fourth to help share the load at Adelaide Oval.

That means swing bowler Michael Neser will be 12th man when the Test starts on Friday, with paceman James Pattinson and batsman Bancroft released to play domestic cricket.

“We’re unchanged,” said skipper Tim Paine. “Obviously we thought we played a pretty good game of cricket last week (in Brisbane). Our attack is all feeling good and fresh and they have all got great pink-ball records so no need to change.”

Bancroft’s departure to play for Western Australia in Perth means there will be no immediate batting substitute in case of a concussion.

Paine joked that “we’ll just get someone out the crowd”, before adding: “‘Bangers’ is a couple of hours away on a plane so if anything does happen, we will be able to get him back pretty quickly.”

The decision comes just days after Bangladesh were forced to use two concussion substitutes in one day, with Liton Das and Nayeem Hasan both forced out of their day-night Test against India in Kolkata.

The task facing Pakistan is ominous with Mitchell Starc, Josh Hazlewood and Nathan Lyon all in the world’s top five wicket-takers in day-night Tests, while Pat Cummins is the world’s top-ranked bowler.

Australia have won all five pink-ball Tests they have played since the concept was launched four years ago, with Paine warning his pace attack was relishing the chance to bowl under lights on a home wicket.

“That (Adelaide) wicket looks a little bit perhaps drier than it was for the last pink-ball Test we played here against England,” he said. “But as we know, the pink ball always offers enough. Our fast bowlers certainly enjoy bowling with it, particularly under the lights and the games tend to go quite quickly. So I think the bowlers are excited to be back in Adelaide. The wicket, for a drop-in wicket, is probably the best drop-in wicket in the world so it offers the fast bowlers something which is very rare for a drop-in wicket.”

Australia go into the match with a settled top order spearheaded by David Warner, Joe Burns and Marnus Labuschagne, who all fired at the Gabba.

Steve Smith was the exception, out cheaply to leg-spinner Yasir Shah who has now dismissed him seven times in Test matches.

Geopolitics of KAZAKHSTAN: Between CHINESE DRAGON and RUSSIAN BEAR