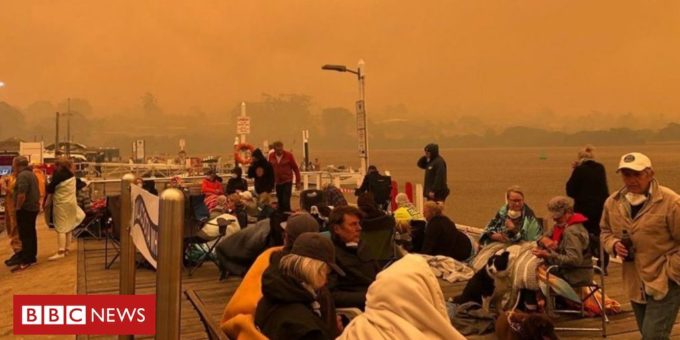 The Australian navy has begun an operation to evacuate hundreds of people trapped in the fire-ravaged town of Mallacoota.

The HMAS Choules is expected to take up to 1,000 people.

Some 4,000 residents and tourists have been stranded on the beach since Monday night when fires cut roads and engulfed the town, in the state of Victoria.

Thousands are fleeing parts of neighbouring New South Wales, where a state of emergency is in force.

Since September fires have killed 19 people in the two states.

More than 1,200 homes have been burnt. At least 28 people remain missing after fires this week alone.

Meanwhile Prime Minister Scott Morrison has come under attack for his response to the fires.

He was heckled by angry locals in Cobargo, New South Wales, and had to cut short his visit to the fire-hit town.

Mr Morrison has also faced criticism for his climate change policies, but he insists that Australia is meeting the challenge “better than most countries” and fulfilling international targets.

Mr Morrison had earlier been criticised for going on holiday to Hawaii as the bushfire crisis worsened. The rising public anger at his absence eventually forced him to cut that trip short.

What is happening on the ground?

New South Wales Premier Gladys Berejiklian has declared a week-long state of emergency in response to the escalating bushfire threat, which started at 08:00 local time on Friday (21:00 GMT on Thursday).

Thousands of people are already fleeing a vast “tourist leave zone” in NSW, with supplies running low in some cut-off towns. It’s been called “the largest relocation out of the region ever”.

High temperatures and strong winds are forecast for the weekend, leading to “widespread extreme fire danger”. The state government has warned that conditions were likely to be “at least as bad” as New Year’s Eve, when hundreds of homes were destroyed.

Meanwhile in Victoria, Premier Daniel Andrews declared a state of disaster for six areas and resorts, including Mallacoota.

He said the HMAS Choules would take up to 800 people from the town and make “multiple trips”.

Other officials later said the ship would carry up to 1,000 evacuees.

Amphibious vehicles were seen mid-morning ferrying the first evacuees out to the HMAS Choules.

Plans to evacuate some of the most vulnerable people by air on Thursday were thwarted by poor visibility caused by smoke.

There’s never a single reason why wildfires escalate and, in the case of Australia, a perfect storm of factors is involved.

The country regularly sees fires but they are usually centred on bushland while the current blazes are striking forests, which burn hotter and higher so are harder to tackle.

There’s plenty to ignite. A programme to create firebreaks – deliberately clearing vegetation to prevent it from catching fire – has unfolded less quickly than hoped. It’s slow, labour-intensive work, and expensive too.

On top of all this, a pattern of unusually dry weather over the past three years culminated in the driest spring on record at the end of last year.

That left many areas vulnerable to fire, particularly when 2019 also proved to be Australia’s hottest on record – and warmer conditions cause more evaporation, adding to the risk.

All this has sharpened Australia’s divisions over climate change. A coal-rich economy that depends on fossil fuels faces new questions about its own hand in raising temperatures.

What about other parts of Australia?

In the capital Canberra – an administrative region surrounded by NSW – bushfire smoke meant air quality there was rated worse than any major global city on Thursday, according to Swiss-based group AirVisual.

An elderly woman died after being exposed to the smoke as she exited a plane at Canberra airport, local reports say. Australia Post has suspended deliveries in the city “until further notice”.

Meteorologists say a climate system in the Indian Ocean, known as the dipole, is the main driver behind the extreme heat in Australia.

However, many parts of Australia have been in drought conditions, some for years, which has made it easier for the fires to spread and grow.

Have you been told to evacuate? You can get in touch by emailing haveyoursay@bbc.co.uk if it is safe for you to do so.

Please include a contact number if you are willing to speak to a BBC journalist. You can also contact us in the following ways:

Carlos Ghosn Flirted With Hollywood, Then Delivered a Plot Twist