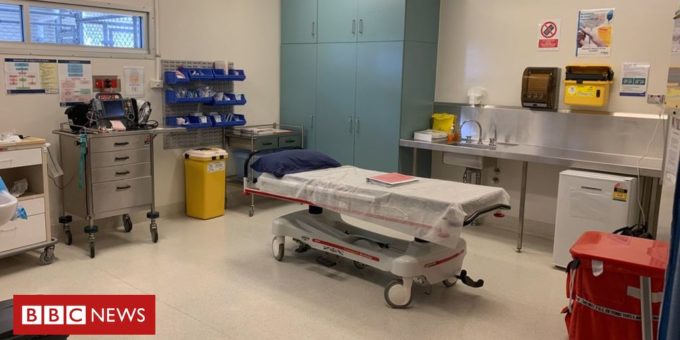 Australia has defended its plan to send citizens evacuated from the coronavirus outbreak in China to an immigration detention centre on a remote island.

The evacuees – overwhelmingly Chinese Australians – would be quarantined on Christmas Island for two weeks.

Some waiting in Wuhan, China, have questioned whether “white Australians” would be treated differently. Doctors have also criticised the plan.

But the government said it was the best solution in the short term.

“I can’t clear out a hospital in Sydney or Melbourne or Brisbane,” Home Affairs Minister Peter Dutton told reporters on Thursday.

“I don’t have a facility otherwise that we can quickly accommodate for what might be many hundreds of people, and Christmas Island is purpose-built for exactly this scenario.”

The small Australian territory, about 2,600km (1,616 miles) from the mainland, has held thousands of asylum seekers since 2003. Conditions there have previously been criticised by the UN and human rights groups.

Many potential evacuees say they are conflicted over whether they will take up the offer. Officials have told them they will need to pay A$1,000 ($673; £512) for the flight, and agree to go to Christmas Island in order to be repatriated.

They may have to be flown to the mainland first before being transported to Christmas Island for quarantine, Mr Dutton said.

More than 600 Australians have registered for help after China effectively locked down Wuhan and surrounding areas in Hubei province. Canberra has said it will prioritise vulnerable groups such as the elderly and young families.

‘Not being taken to our own country’

Many have expressed gratitude for the government’s help, but also raised concerns about the plan and contrasted it with evacuations carried out by other nations.

The US and Japan repatriated hundreds of citizens to major cities this week.

Sydney man Daniel Ou Yang told the BBC: “Just if we go by the fact of comparing country to country, we’re not even being landed in our own country.”

He raised concerns about the level of medical care on the island, adding: “Are we getting this kind of treatment because we’re not Caucasian Australian? Because we’re Chinese Australian?”

On Friday, the government said it would send “significant” medical equipment and 24 medical staff to the island to create “a deployable hospital”. It did not immediately respond to questions about alleged discrimination.

Canberra has said the plan follows the advice of medical professionals. However, the Australian Medical Association has argued people would be better quarantined on the mainland.

“We feel that the repatriation to Christmas Island – to a place previously the focus of populations under enormous mental and physical trauma and anguish – is not a really appropriate solution,” the association’s president, Tony Bartone, told Australia’s Nine Network.

More than 140 children are among those stuck in the region, reported the Australian Broadcasting Corporation.

One Sydney woman identified as Ms Liu told the broadcaster: “We are not prisoners, how could they treat us in a detention centre rather than a proper medical facility?”

Wenbo Yu, whose wife and two children are in Wuhan, said he would prefer his loved ones to stay where they are.

“Compared to Wuhan, we believe Christmas Island is even more unpredictable,” he told the ABC.

Christmas Island’s detention centre was closed in 2018 but re-opened the following year. It currently only houses a family of four Sri Lankan asylum seekers who are fighting deportation.

There have been nine confirmed cases of coronavirus in Australia. Two people have recovered and been released from hospital, authorities said on Thursday.

In total, more than 9,000 people have been infected globally, and 213 people in China have died.

How Will the Winner of the Iowa Caucuses Be Chosen? Here’s What You Should Know