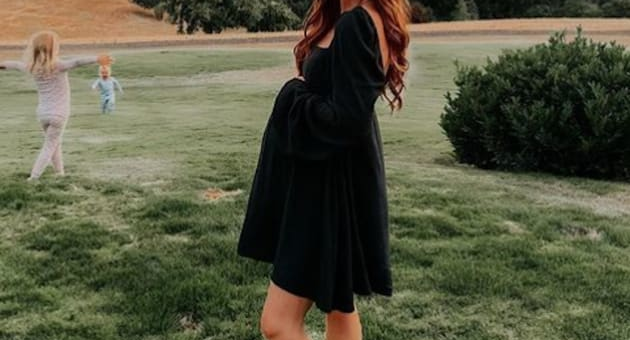 Audrey Roloff is pregnant with her third baby.


But she’s also going through pregnancy for the first time… in one very specific way, that is.


The former Little People, Big World star and her husband, Jeremy, found out the genders of their son (Bode) before he was born and also of their daughter (Ember).


For this go-around, however?


Audrey and Jeremy are preparing to be shocked, having decided NOT to have a doctor reveal to them whether a boy or a girl is on the way.


“7 months. I can’t believe how fast this pregnancy has gone by,” wrote Roloff as a caption to the recent baby bump photos above and below.


“We’ve been having more conversations about names lately… it’s harder to be prepared for both genders. but we are so excited to be surprised this time.”


The couple announced this pregnancy to the world on July 3, sharing footage of them and their two previous kids celebrating in a field.


“Our family’s growing! Maybe I can convince Audrey to get a minivan now?” Jeremy wrote as a caption to the video, while Audrey chimed in as follows:


“Our little tie breaker is coming this November!”


In the time since, Audrey has kept fans well apprised of her stomach’s status, posting one baby bump photo after another.


“My dream birthday came to life,” she wrote as a caption to the following snapshot, for example.


“Dress up, drinks, dessert, and country line dancing the night away with friends and fam to celebrate the big 3-0.”


Roloff also took a few layers off and showed off her belly at the six-month mark.


It really is a miracle what a woman’s body can do, you know?


Audrey, of course, is not the only member of her famous family who is expecting.


On July 20, Jacob Roloff and his wife, Isabel, confirmed they also have a child on the way. This will be their first… EVER.


“We are elated to share that the baby boy we have been dreaming of is coming this December,” Isabel wrote as a caption to a precious photo of the pair.


“Not for you but us: I’m very happy to say. We’re having a son,” Jacob added, marking the occasion in his unique, semi-bitter way.


On the very unfortunate flip side, Tori Roloff suffered a miscarriage in March — and has since admitted that she and husband Zach are struggling to conceive.


“I really thought I would pregnant again by now. So many people told me after a loss it usually happens so fast. That’s not our reality,” wrote Tori on July 13, right smack dab in between Audrey and Isabel’s pregnancy announcements.


Tori went on to reference the daughter she lost earlier in the way.


“Our pastor reminded me this Sunday that God leads us in a way that makes us dependent on Him,” she continued.


“Following Jesus doesn’t mean there will be no pain- it means that his powers are bigger than our pain.


“I am a faithful servant and I pray that I’m not forgotten.


The mother of two concluded at the time:


So that’s where I’m at. Fully dependent on God. Praying that one day we will be able to add to our family. But also giving thanks for the small things.


I wanted to also say thank you to every single one of you who have shared your stories with me. It in a way makes things easier and harder all at the same time.


To all those mamas past present and future- love you.

Australia Open: Maria Sharapova Crashes Out In First Round
2020-01-21