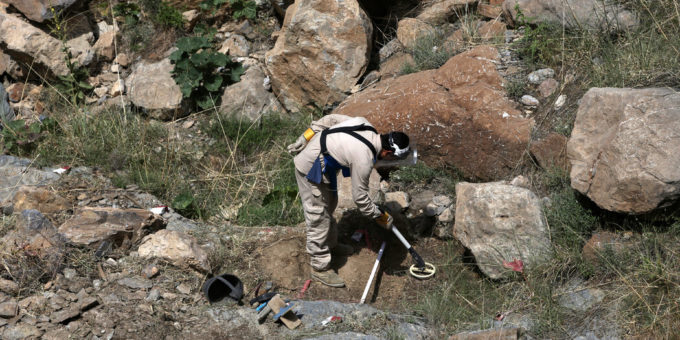 Washington’s peace envoy to Afghanistan, Zalmay Khalilzad, finished a four-day visit to Kabul on Tuesday. Mr. Khalilzad is an Afghan-born American diplomat who led negotiations ahead of the Trump administration’s February 2020 peace deal with the Taliban, which laid out the conditions and timeline for the American withdrawal.

The U.S. Embassy in Kabul said in a statement on Wednesday that American leaders met their Afghan counterparts in the city this week and “agreed that maintaining political unity was essential during this period of transition.”

The HALO Trust, a British charity with an American affiliate registered in Washington, began working in Afghanistan in 1988. Its field teams clear land mines, dispose of unexploded ordnance found in bombs and bullets, and build facilities to store guns and other weapons safely. The group has programs in 26 countries and territories, including in Iraq, where it began working in 2018.

The HALO program in Afghanistan, which started months before the Soviet Army pulled out of the country in 1989, employs more than 2,600 local staff members and remains the group’s largest operation in the world. HALO says on its website that over the past 30 years, it has worked with the Afghan government to make nearly 80 percent of the country’s recorded minefields and battlefields safe.

Still, the group says, an area of Afghanistan as large as Chicago still needs to be cleared.

Diana, Princess of Wales, called attention to HALO’s work in 1997, when she walked through a live minefield in Angola — once home to one of the most heated Cold War conflicts in Africa — to highlight the danger of mines around the world.

Diana’s youngest son, Prince Harry, retraced her steps in 2019 during a trip through the continent with his wife, Meghan, Duchess of Sussex, and their son. HALO said at the time that it had cleared about 100,000 mines in Angola since Diana’s visit.

Vaccines for Young Children Are Coming, but Many Parents Have Tough Questions
2022-06-18

Sooraj Barjatya reveals that Salman Khan has shown interest in his next : Bollywood News
2020-01-21