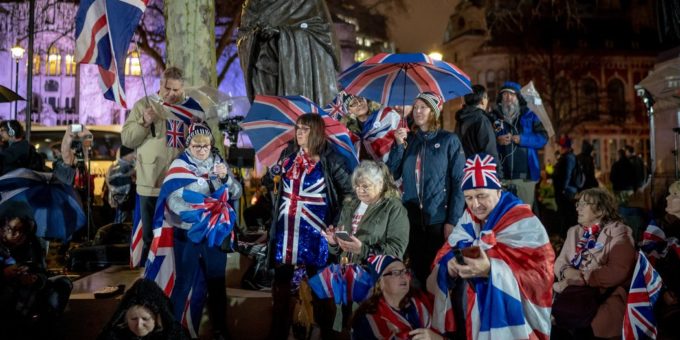 LONDON — To the recorded peals of Big Ben and the gentle fluttering of Union Jacks, Britain bade farewell to the European Union at 11 p.m. on Friday, severing ties to the world’s largest trading bloc after nearly half a century and embarking on an uncertain future as a midsize economy off the coast of Europe.

For Britain, having transitioned in the postwar era from a globe-girdling empire to a reluctant member of the European project, it was yet another epoch-making departure.

It is a departure that will upend settled relations in virtually all areas of society, the economy and security matters, while confronting Britain with new questions of national identity. Three and a half years after the former prime minister, Theresa May, proclaimed that “Brexit means Brexit,” the British government will finally have to decide precisely what that means.

Britain must still negotiate its future trade relations with the European Union, a thorny process that could take through the end of the year, or longer.

On Friday, the departure elicited both hope and trepidation from Britons. Many simply were relieved that the bitter and divisive debate over Brexit is over.

“This is the moment when the dawn breaks, and the curtain goes up on a new act in our great national drama,” said Prime Minister Boris Johnson, in an address to the nation on Friday night that he also posted on his Twitter account. Brexit, he said, was a chance to “spread hope and opportunity to every part of the U.K.”

Mr. Johnson, whose vow to “Get Brexit Done” won him a commanding majority in elections last month, vowed to knit together a country that had been split geographically and generationally by the Brexit debate. Even the future of the United Kingdom now seemed uncertain, with Scotland threatening to renew its drive for independence and Northern Ireland musing about unification with Ireland.

On Friday, Mr. Johnson’s cabinet met in Sunderland, an industrial city in the north, a traditional Labour stronghold where the early returns after the referendum in June 2016 foretold the country’s stunning decision to leave the European Union. The prime minister celebrated Brexit as a triumph for self-government, and promised to undertake the “biggest revival of our infrastructure since the Victorians.”

For all the historical resonance, the celebrations of Britain’s departure were oddly attenuated. A countdown clock flickered on the darkened wall of 10 Downing Street, while inside the prime minister hosted a party with British-sourced food and English sparkling wine.

British embassies were instructed to hold low-key affairs — no special events — and to avoid anything that smacked of “triumphalism.”

In a chilly Parliament Square, several thousand Brexiteers gathered to sing “God Save the Queen” as the clock struck 11 p.m. Even the timing of the exit seemed a compromise: the European Union decided to make Britain’s departure effective at midnight in its Brussels headquarters.

Some British commentators complained that the Europeans made a greater show of Britain’s leaving, which they had opposed, than Britain did. Brussels staged a light show in the Grand Place on Thursday, while members of the European Parliament serenaded their departing British colleagues with “Auld Lang Syne.”

The ambivalence attested to the divisions that still run through Britain. Pro-Europe activists were despairing, some channeling their anger into efforts to help Europeans in London navigate the reality of reduced rights and a more tenuous life in a country they had long made their home.

Still, even the most vociferous opponents of Brexit seemed eager to end, or at least suspend, the toxic debate, make the best of the outcome and try to forge a new relationship with the European Union more to their liking.

“Britain can alter its political relationship with Europe, but it can’t alter its historical or geographical relationship and, in the end, we’ll have to find a way of working together,” Tony Blair, a former prime minister and ardent opponent of Brexit, said on Friday to foreign journalists in London.

“It’s a destiny-changing decision and obviously it’s one I’m profoundly sad about,” said Mr. Blair, who had his own struggles with Britain’s fitful relationship with Europe. “But you’ve got to take a big historical look at this.”

As Britain casts off from Europe, Mr. Johnson hopes to deepen his country’s alliance with the United States, starting with a trade deal that the government wants to negotiate in tandem with its agreement with the European Union. President Trump avidly encouraged Brexit and his emissary welcomed Britain’s new status.

“America shares your optimism and excitement about the many opportunities the future will bring,” Robert Wood Johnson IV, the United States ambassador to Britain, said in a statement.

Yet, doubts remained about what sort of a trade deal Britain could expect from President Trump.

“He believes in America first,” said Kim Darroch, the former ambassador to the United States, in an interview with the Guardian. “And he believes, particularly, in rewarding people who vote for him — and that is American farmers and big American corporations.”

For Mr. Johnson, whose capacious Parliamentary majority leaves him with few domestic constraints, the question is which sectors of the economy to prioritize and what trade-offs to make in the post-Brexit era.

His government argues that by freeing itself from European regulation, it could become a leader in new technologies like artificial intelligence. As Mr. Johnson’s influential adviser, Dominic Cummings, once put it, Britain can become the best place for those who want to “invent the future.”

Yet in leaving Europe’s single market and customs union, Britain is sacrificing the smooth and frictionless flow of goods across its borders — something businesses currently take for granted.

Whatever the outcome of the trade talks, exporters and importers will almost certainly face extra layers of bureaucracy and border checks. That will affect industries, from aerospace to food, and could cost jobs in parts of the country where Mr. Johnson’s Conservatives won unexpected victories in last month’s general election.

Formal negotiations between London and Brussels are expected to start in late February or early March. Mr. Johnson has insisted they must conclude this year, but critics say the timetable is unrealistic.

Though the European Union is the far bigger economic entity, it is wary of allowing Britain to become a competitor with lighter regulations, which could undercut European producers. Its goal will be to extract pledges from Britain not to dilute its environmental, labor, or antitrust rules.

Britain will probably want to negotiate everything simultaneously, while also engaging in talks with the United States and other nations — a strategy that it hopes will increase its leverage. In Sunderland, Mr. Johnson said he hoped to strike deals covering 80 percent of British trade within three years.

In time, Brexit will overhaul how the country trades. But well before that, the split has sent tremors through the lives of Europeans who make their homes in Britain, instantly unraveling the promise that they could live and work there without question.

For British cities shaped by waves of migration, none more so than London, the change could be seismic. In shops, restaurants and cultural centers, Europeans talk of going back to their home countries sooner than planned. They bemoan the application required to stay. And those who might once have taken their place are increasingly choosing not to come at all.

“Through no fault of their own, people who thought they had forever built their lives on their rights as European Union citizens are all of a sudden having the rug pulled out from under them,” said Maike Bohn, a co-founder of the3million, a group that promotes European citizens’ rights.

When the links between Britain and the European Union are severed at the end of the transition period, European citizens’ rights to live and work in Britain will end, as will the rights of Britons to move and work throughout the bloc.

For Britons, too, the date of Britain’s departure hardly means an end to rancorous debates that have split families and friends over the last three years. The wounds remain raw. And the labels born of Brexit — Remainers who fought to keep Britain in the European Union, and Leavers who fought to do the opposite — have yet to wear off.

Amanda Chetwynd-Cowieson, a co-founder of For our Future’s Sake, a youth-led group that campaigned to hold a new Brexit referendum last year, said there was only so much healing that could happen while the battle over what kind of Brexit Britain should pursue rages on.

Coming from a family with many members who supported Leave, and from a part of England that voted to leave, she said the three years of turmoil were still taking their toll.

“We’ll have a couple months of people trying not to talk about it again, trying to pretend it’s not a thing that’s happening, trying not to bring it up at dinner,” Ms. Chetwynd-Cowieson said. “But realistically it’s not going to be sorted in a year. It’s going to start rearing its head and opening divisions within families again.”

Mr. Blair, the former prime minister, warned that Mr. Johnson would have to work hard to prevent the breakup of the country, given renewed calls for Scottish independence and Irish unification.

A majority in Scotland and Northern Ireland voted against Brexit in 2016, and on Friday evening, the headquarters of the Scottish government in Edinburgh was lit up in the colors of the European flag.

Mr. Blair acknowledged that the British had always been ambivalent about European integration. But he said, “the tragedy is that it was actually quite a successful relationship.” Those who dream of Britain rejoining the bloc one day will have to wait for a while, he added.

“Who knows?” Mr. Blair said. “The thing I’m sure about is that there’s no point in occupying a lot of time on that now.”